The Simon Wiesenthal Center (SWC) is a leading international Jewish human rights organization founded in 1977 by Rabbi Marvin Hier. With 400,000 member families, the SWC confronts anti-Semitism, hate, and terrorism, stands with Israel, defends the safety of Jews worldwide, and teaches the lessons of the Holocaust for future generations. The Wiesenthal Center is an accredited Non Governmental Organization (NGO) at the United Nations, UNESCO, the OSCE, the Organization of American States, the Latin American Parliament, and the Council of Europe. Headquartered in Los Angeles it has offices in New York, Chicago, Miami, Toronto, Paris, Jerusalem, and Buenos Aires. Moriah Films is the two-time Academy Award®-winning film division of the Simon Wiesenthal Center. The Museum of Tolerance Los Angeles, founded in 1993, is the educational arm of the Simon Wiesenthal Center and the Museum of Tolerance Jerusalem is scheduled to open in 2023.MUSEUM OF TOLERANCE - LOS ANGELESwww.museumoftolerance.com

The Museum of Tolerance Los Angeles, the educational arm of the Simon Wiesenthal Center, challenges visitors to confront bigotry, anti-Semitism, and hate and to understand the Holocaust in both historic and contemporary contexts. Since opening in 1993, the Museum has hosted over 7.5 million visitors. More than 3.5 million children and youth have participated in the Museum experience and its programs, and almost 200,000 adults have been trained in the Museum’s customized professional development programs over the last 20 years. A recipient of the Global Peace and Tolerance Award from the Friends of the United Nations, visitors to the Museum of Tolerance and Simon Wiesenthal Center have included American Presidents, Israeli Prime Ministers, Kings, and European and religious leaders, as well as numerous Nobel Laureates.

The Museum of Tolerance Jerusalem, scheduled to open in 2023 in the heart of the city, is a 185,000-square-foot campus that will celebrate the vibrancy of Israel’s democracy by promoting universal respect and co-existence as well as dealing with the vital issues of our times. Designed for visitors of all ages, religions, and cultural backgrounds from throughout the region and the world, the Museum will encourage democracy, promote regional stability and global harmony, combat the roots of extremism and anti-Semitism, and advance tolerance and human dignity for all.

Moriah Films is the two-time Academy Award®-winning film division of the Simon Wiesenthal Center. It has produced 17 documentaries that have examined the tragedy of the Holocaust, seminal events in modern Jewish history, the creation of the State of Israel and the lives of epic personalities of the 20th and 21st centuries. Moriah Films’ in-house production studio is a state-of-the-art film, video, and sound editing facility using the latest and most cutting-edge technology available in the industry. Over one billion people around the globe have seen Moriah’s films, including Oscar® winners Genocide and The Long Way Home, in theaters, on cable, and on every major streaming platform, including Netflix, Amazon Prime and Apple TV.

Over the last year, the programs and services provided by the Simon Wiesenthal Center, including its Museum of Tolerance in Los Angeles have impacted greatly on people the world over.

Forging Interfaith Partnerships: The Simon Wiesenthal Center continues its work with its peace partners around the globe, including most recently in the UAE, Bahrain, Azerbaijan, Indonesia, Sudan, and Turkey, as well as in Israel, to develop additional joint programming and projects to deepen and expand on the Abraham Accords. The SWC delegations, led by Rabbi Marvin Hier, have met with Jordan’s King Abdullah in Amman, Crown Prince Mohammed bin Zayed in the UAE, global business leader Mohamed Ali Alabbar and Bahrain’s King Hamad.

The Simon Wiesenthal Center has been a trailblazer in interfaith and multifaith work for four decades. Its outreach has included six SWC Papal audiences with three Popes in the Vatican; the Dalai Lama’s visit to the Museum of Tolerance (MOT); numerous partnerships with Indian spiritual leader Sri Sri Ravi Shankar; as well as with other religious leaders in Africa, throughout Asia and in the Arab world. Helping pave the way for the historic Abraham Accords in 1995, a visit by Jordan’s King Hussein and Queen Noor made history by becoming the first Arab leaders to visit a Jewish American miuseum – the Museum of Tolerance.

David Ben-Gurion, Israel’s founder and its first Prime Minister is the subject of the 17th production from Moriah Films. The latest production features Israel’s longest-serving Prime Minister, who devoted his life to the creation of the State of Israel. Richard Trank takes a deep dive into Ben-Gurion’s life, work, family, and the passion that drove him to create the Jewish State. Moriah is certain this riveting film will also be acquired by a major streaming service.

A cultural and educational icon in the city of Los Angeles, millions of visitors have experienced the Museum of Tolerance’s cutting-edge exhibits, landmark professional development programs customized for youths to adults, as well as special events including film screenings, author series, and onstage performances.

A new permanent interactive exhibit reveals the horrors inflicted on the world as a result of the Wannsee Conference that took place on January 20, 1942, where 15 high-ranking Nazis officials, eight of them PhDs, unanimously decided to annihilate Europe’s entire Jewish population. The exhibition examines the officials who devised the so-called “Final Solution of the Jewish Question,” as well as the heroes of the Holocaust, brave individuals who risked their lives to stand up to Nazi terror.

The Museum of Tolerance Jerusalem, currently under construction and scheduled open in 2023 has been praised by Israeli Prime Minister Benjamin Netanyahu as “very distinctive and elegant – a beautiful fit for the city of Jerusalem,” the Museum will deal with the vital issues of the 21st century and celebrate the vibrancy of Israel¹s democracy.

For close to three decades, the Simon Wiesenthal Center’s Digital Terrorism + Hate project releases an annual report giving a comprehensive overview of social media and online communication platforms. The 2022 Digital Digital Terrorism + Hate report demonstrates the widespread proliferation of hate messaging and the marketing and distribution of hate, including from Russian disinformation and fake news sites; conspiracy theories; the targeting of LGBTQ+ and minority communities; anti-Semitic, racist, and xenophobic hate messaging; and the infiltration of children’s gaming platforms by neo-Nazis and other extremistsInMotion Magazine, the Simon Wiesenthal Center's publication which is sent to the Center's members as well as government officials, and members of the media. InMotion details the Center's vast social action agenda and its programs throughout the world.  â¨â¨ 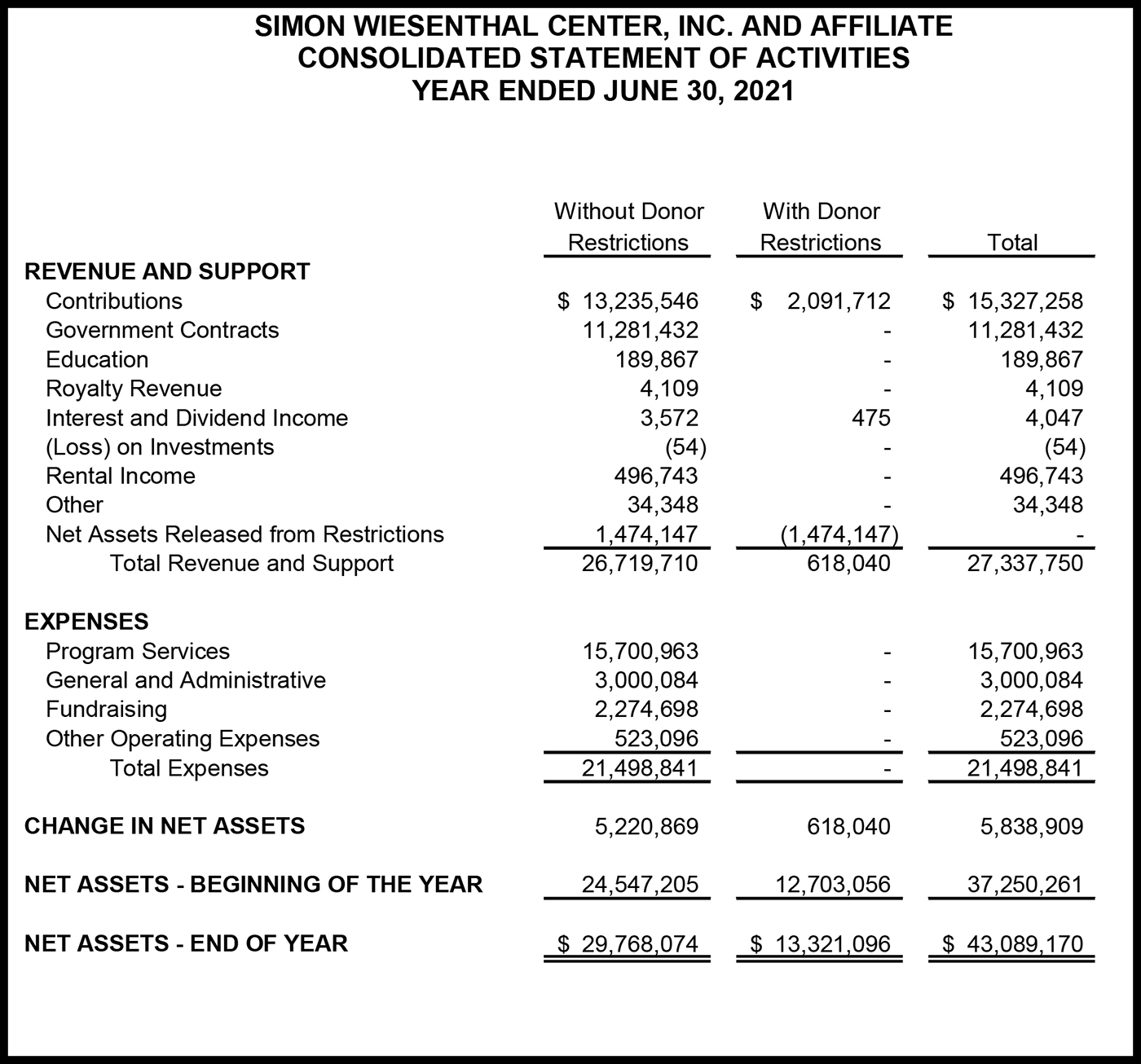