The Frankfurt Book Fair (FBM - Frankfurter Buchmesse) has deeply evolved over the past years, its 2022 edition was not only affected by the post-Covid environment but also concerned with the risk of the Russian war on Ukraine expanding towards the rest of Europe.

The Wiesenthal Centre's Director for International Relations, Dr Shimon Samuels, explained that the Centre has annually monitored antisemitic books on the shelves of six Arab Book Fairs. The names of books and publishers’ fomenting hate were then sent to the “Fair of Fairs” of Frankfurt, always held in autumn, suggesting that these - mostly recidivists - be denied access, in the spirit of the Fair's rules.

At the opening press conference, the Frankfurt Book Fair (FBM) Director and CEO, Juergen Boos, noted the reduced number of stands compared to the pre-Covid years, as many smaller publishers were struggling as an effect of the pandemic, and many ended up joining in collective stands.

As the third anniversary of the Abraham Accords, it was clear that hate material had disappeared from several important Arab book fairs, but was present in others such as Damascus, Syria, or in Benghazi, Libya. and in Egypt.

Moreover, the official Russian and Iranian stands were absent in Frankfurt, banned due to the current geopolitical situation. Several Iranian dissidents were present at the public conferences. The discussions focused on the repression enacted by the regime in Iran, but also on Russia's war on Ukraine, Russian opposition in exile, the situation in Afghanistan and the challenging future of Europe.

In 2015, Iran boycotted the FBM due to the presence of novelist Salman Rushdie, invited as an honoured guest. Ayatollah Khomeini's fatwa to punish him, issued 33 years ago, had almost succeeded this August when Rushdie was stabbed multiple times.

That year, Interviewing an Iranian official in an empty pavilion, I asked him: “why does Iran hate Israel?” His response was: “to support the Palestinians.” ... “So,” I continued, “what if the Palestinians made peace with Israel?” He answered: “they will not, as we will not let them!”

Earlier this month, we revealed the antisemitism of the 2022 Nobel Prize Laureate for Literature, Annie Ernaux. She never turned up at the FBM.

Compared to previous Fairs, most of the Arab stands had far fewer books on display than usual, claiming logistical shortfalls in times of crisis, so we also checked the publishers' catalogues. 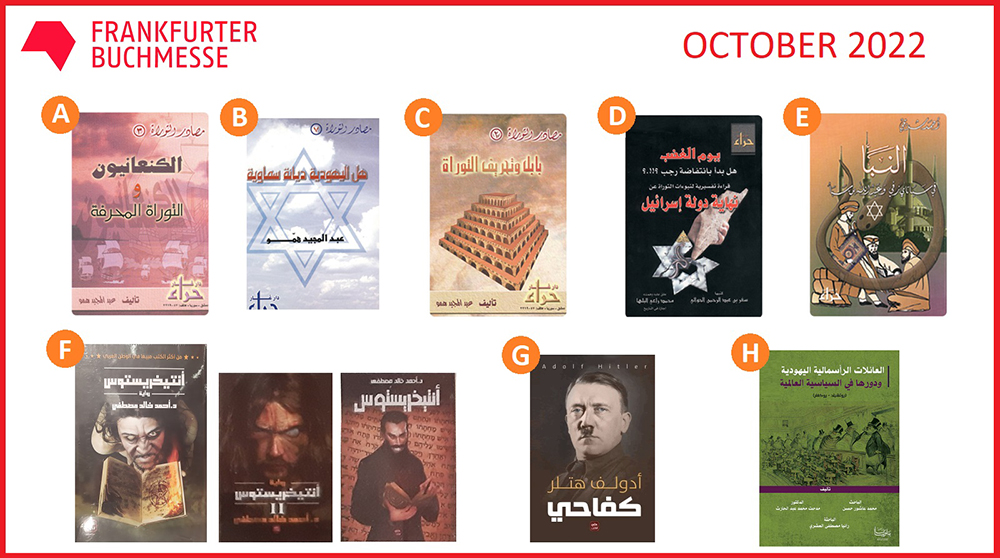 A) The Canaanites and the Distorted Torah

“The Canaanite impact on the Jewish religion, as the Jews took from them 'El'., the Divine Assembly, the worship of Baal and even the language they called '‘the lip of Canaan'. We were Canaan, but they [the Jews] stole everything from our civilization, falsified and deformed it, calling it their own.”

B) Is Judaism a Heavenly Religion?

“People have been occupied with this religion [Judaism] since ancient times and considered it heavenly as the religion of Moses, 'Musa' Peace be upon Him. But there were two scripts, the Mosaic and the Jewish. The current book of the Torah is a paga text that calls for the worship of ‘many gods’: El, Baal, Astarte, Anah, Aden, Tambul, Jehovah...”

C)  Babylon and the Distortion of the Torah

"The Jews distorted the teachings of God to satisfy their sins."

The prolific Abdul Majeed Hamo also authored other similar books: The Torah and Palestine: Where did the Torah come from? - “Kamal Salih tried to penetrate the Arab mentality, deciding that the Jews are the sons of Arabia. Their archaeology is perverted and forged” - and God or Jehovah - Which is the God of the Jews? - “The Jews did not know God nor worship him. By cunning and deception, they purify themselves in front of the people. They worship each other.”

Among the other books and authors published by Syrian Dar Ghar Hira, worthy of note are:

D) The Day of Wrath, by Safar bin Abdul-Rahman al-Hawali

This is a treatise on the Second Intifada, arguing that "the Biblical prophecies used by Christian fundamentalists to support the state of Israel actually predict its destruction."

"This book unveils the Jewish conspiracies against the Muslim world."

An Egyptian publisher, Aseer Al-Kotob, displayed a handful of books, among which:

“A fictional novel... that combines fantasy and reality... With the advent of Islamic civilization, the novel explains how Islam fought witchcraft and sorcery and the Jews.... The emergence of conspiracy and the Crusades... and the role of the Jews in controlling peoples and governments since time immemorial and its relationship with magic and demons and trying to control the world using this malicious science. The great role the Jews played in the formation of the new secular Europe in the last ten centuries... technological inventions, the emergence of radio waves... the harnessing and use of media for the emergence of the Antichrist... radio stations broadcasting messages - 'the time has come!' - and so on encrypted... These radio stations were at the mercy of the Jews.”

G) In their catalogue, Aseer Al-Kotob also has a fresh edition of Adolf Hitler's Mein Kampf!

The German-based Ketabak Bookstore stand had a collection of publishers from different Arab countries, among which Bibliomania Publishings (based in Cairo, Egypt), lists:

The book claims Jewish influence in banking, media, pornography etc... In its online presentation (in Arabic) it states:

"The Jews were and still are the owners of evil, ruin and destruction in this world. To them is attributed all evil on this earth; They are the killers of the prophets, and they are the enemies of civilization. They are the ones who killed and displaced thousands of innocents, and they are the ones who traded in the health of millions, Thousands of honor, violated the sanctities of millions, plundered and stolen the resources of peoples, falsified history. They manipulated the minds of billions of people and did all of this only for their interest and material gains that they made."

During the same period as the Frankfurt Book Fair, Egypt's Bibliomania was displaying Adolf Hitler's Mein Kampf on its packed stand at the Benghazi Bookfair in Libya, as can be seen from its Facebook page:
https://www.facebook.com/bibliomania.eg/photos/pcb.3498492453719367/3498492237052722 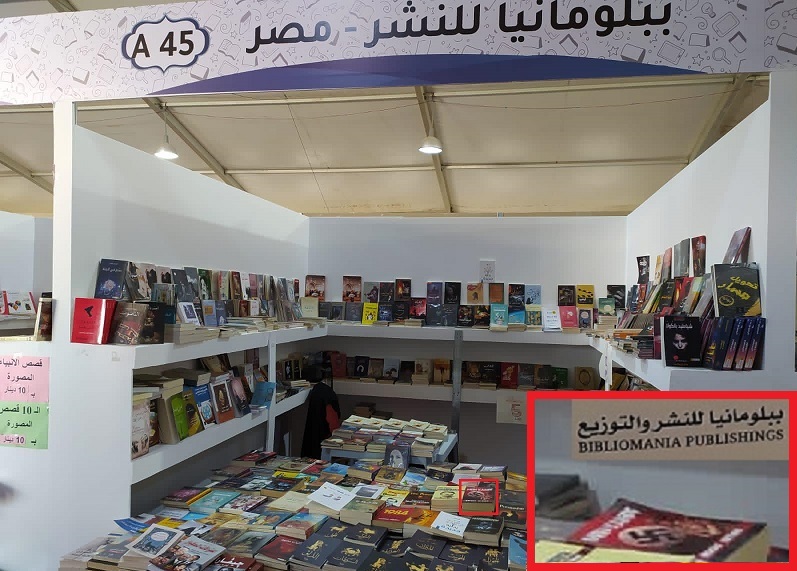 This year, a series of conditions at the Frankfurt Book Fair has kept antisemitism and hate diminished, compared to what we had witnessed over the past decades. Namely the absence of Iran's official stand and Syria's reduced presence. Other Arab stands are now in line with the Book Fair's code of conduct and the Abraham Accords. The Egyptian stands held mixed publishers, including some who have antisemitic texts.

Its Runner-Up Prize to Egypt

We congratulate Sheikh Mohammed bin Rashid Al Maktoom and the Frankfurt Book Fair, for establishing a partnership - as a first step in the Arab region - for books, fairs, film festivals, games, art and technology.

"The Wiesenthal Centre is ready to work with this strategic partnership to oust all forms of bigotry and hate. This 'new' reality may help us understand the reason for our 20 years of chasing antisemitism from Book Fairs. Recent events have awakened many, though displaying Mein Kampf, The Protocols of the Elders of Zion and other such canards are still frequent. As such, we are proud to work with the Frankfurt Book Fair, to be sure that hate-mongering publishers remain banned or that their presence is drastically limited," concluded Samuels.