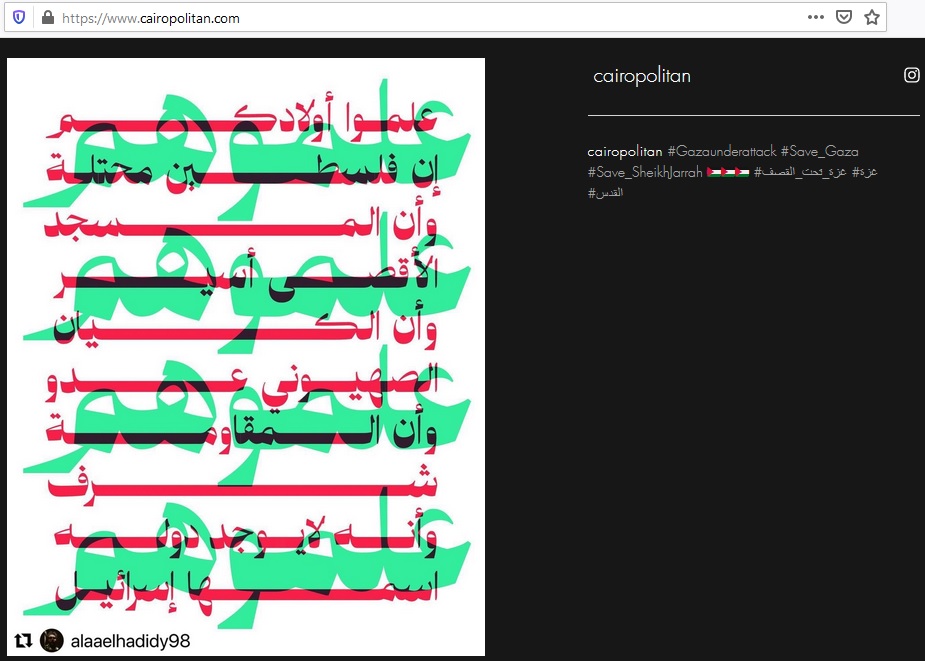 The text in Arabic reads:

“Mr. President ad Interim, this is an example of art abused in the service of hate,” argued Samuels, “The Cairopolitan exhibition will open in the Institut Français Egypt Centre from 31 May to 17 June (a delay from the original date of 17-30 May).”

The Centre recalled, “a December 2018 correspondence with then IF President, Pierre Buhler, regarding the Institut Français in Egypt prominent award to the creator of the antisemitic television series, ‘Horseman Without a Horse,’ based on the Russian Tsarist forgery, ‘The Protocols of the Elders of Zion’ and a warrant for murder.”

The letter now urged the President ad Interim, “to guard the good name of the Institut Français, by canceling this contract with Cairopolitan and denying its right to use the IFE premises, on grounds of incitement to hate and violence,”... "We suggest that the IF follow the Assemblée Nationale and other French institutions, in adopting the IHRA (International Holocaust Remembrance Alliance) Definition of Antisemitism. This would educate those who consider Cairopolitan language as an acceptable form of 'anti-Zionism'. The definition clearly explains its antisemitic character.”

“The Copernic Synagogue bombing in 1980, the attack on Goldenberg restaurant in 1982, the kidnapping and torture to death of Ilan Halimi in 2006, the Toulouse massacre of children in 2012, the Hyper Cacher terrorist attack in 2015, the vicious murders of Sarah Halimi in 2017 and of Mireille Knoll in 2018... were cases in which French Jews were killed by Islamist anti-Zionists, turned on by the language of the sort used by Cairopolitan, seemingly endorsed by the Institut Français in Egypt,” concluded Samuels.