In a letter to French Interior Minister, Christophe Castaner, the Simon Wiesenthal Centre Director for International Relations, Dr. Shimon Samuels, expressed disgust at the online attack against former Health Minister, Dr. Agnès Buzyn, accusing her – in the language of the medieval blood libel – of "poisoning water wells with the Coronavirus. She appears alongside the yellow star marked ‘Jude’ (‘Jew’), imposed on the Jewish population by the Nazis.” 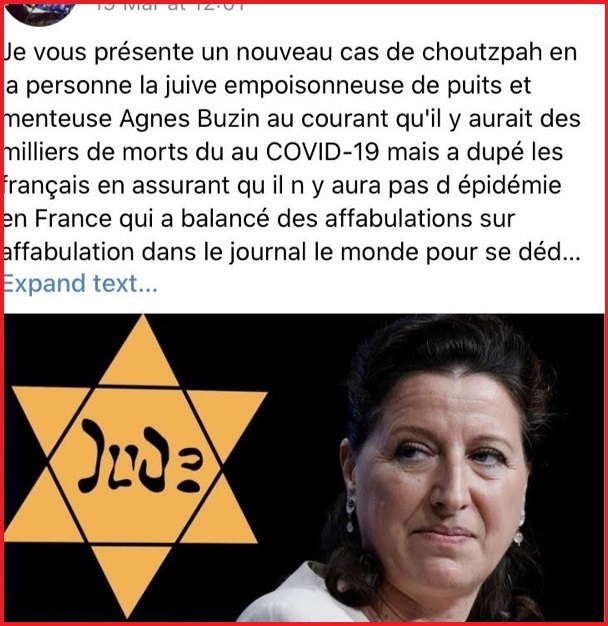 The letter noted: “This is especially outrageous in view of her father's story, Elie Buzyn, a Polish physician, who survived the Buchenwald camp, reached Israel and moved to France. Her grandparents perished during the Holocaust.”

The Centre added: “Dr. Buzyn was married to the son of French survivor and late politician, Simone Veil. It is ironic that both Agnès Buzyn’s electoral posters across Paris, as well as those in memory of Simone Veil were covered with antisemitic graffiti”... continuing, “she then married Yves Levy, immunologist and CEO of INSERM, the French Institute for Health and Medical Research.”

Samuels pointed out that “Dr. Buzyn left her post as Health Minister, to stand for election as Mayor of Paris, representing President Macron’s ‘La République En Marche’ party. To date, the second round of elections is postponed due to the COVID-19 pandemic.”

The Centre was delighted to learn that, “three days ago, Dr. Buzyn – herself a professional haematologist – accepted the pro-bono post as Counsellor for UNICANCER, a federation of 18 centres combating cancer across France. We wish her every success in her new capacity.”

“Mr. Minister, we urge you to investigate and take the strongest measures against those who tarnish the good name of French medicine with the brush of hate,” concluded Samuels.