See our 2017 protest relayed by the press:

On that occasion, Samuels had called this “a blood libel that could have been drawn from the ravings of Hitler to the genocidal Charter of Hamas”... “The cover portrays a black-robed figure with bloodied hands raising a dagger to stab a globe,” and charges the Rothschild family of “financing the Nazi party in its quest for power.” 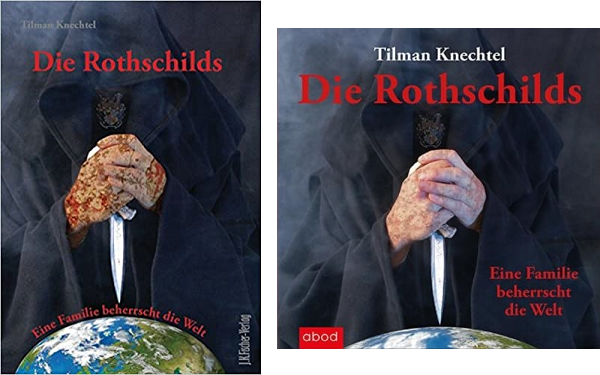 The original hard copy book and the recent audiobook.

The letter continued: “We learned that, with support from Jeff Bezos, the book was withdrawn. Nevertheless, it has now returned to Amazon’s sales list in Germany, also as an audio-book and on Kindle.”

The Centre demanded, “the immediate withdrawal of the book in all its forms, measures to sanction the member of your staff who replaced it and an apology to Jewish clients of Amazon, especially the Rothschild family, who are receiving a copy of this protest... That this could happen twice in today's Germany is unimaginable.”

“Moreover, the purveying of such hatred stains the good name of Amazon everywhere,” concluded Samuels.