“This exhibition… explores the deep, unassailable connection between the Jewish people and the Holy Land… a profound relationship that has helped shape the history of all humanity… It is a response to all those who seek to spread lies to fuel antisemitism, including a persistent delegitimization of Israel and the Jewish people.”
Irina Bokova, Director-General of UNESCO

“People, Book, Land: The 3,500 Year Relationship of the Jewish People with the Holy Land” is co-sponsored with UNESCO. Nevertheless, its opening in Paris in January 2014 was delayed by several hostile member-states, including the entire Arab bloc.

Opened this week at the House of Commons in the British Parliament, the Centre’s Director for International Relations, Dr. Shimon Samuels, noted that, “as the only Jewish organization accredited to the UNESCO World Heritage Committee, we have lobbied against Palestinian theft of Jewish and Christian heritage – from the Bethlehem Church of the Nativity in 2012, to the designation of the Tomb of Rachel and the Cave of the Patriarchs as mosques. In 2016, the Western Wall and the Temple Mount were targeted. This year, it may be Qumran and the Dead Sea Scrolls… This exhibition is a response and a medium for counteraction.”

Hosting the event, Sir Eric Pickles, M.P., spoke of the challenges in his role as United Kingdom Special Envoy for Post-Holocaust Issues and his love for Israel.

Dr. Graciela Vaserman Samuels, as Advisor to the UNESCO Director-General, Irina Bokova, read her message: “It is precisely UNESCO’s role to build the defences against antisemitism… through education, history and the legacy of all cultures, including Jewish culture and Judaism… the cultural heritage of Jerusalem as the holy city of all three monotheistic religions...“The exhibition… explores the deep, unassailable connection between the Jewish people and the Holy Land… a profound relationship that has helped shape the history of all humanity… It is a response to all those who seek to spread lies to fuel antisemitism, including a persistent delegitimization of Israel and the Jewish people.”

Newly-arrived Deputy Ambassador of Israel to the UK, Sharon Bar-li, pointed to the exhibition’s relevance during this centenary of the Balfour Declaration.

Simon Wiesenthal Centre in the UK leader, David Dangoor, spoke of the importance of the display in the House of Commons at a time of growing antisemitism. Lord Polak hoped for a change in UNESCO member-states voting behaviour on heritage.

The Centre presented Sir Eric Pickles with a 3rd century Judean lamp to symbolize his “spark of defence against hate”.

A 1759 map of the Holy Land, appearing in the exhibition, portraying “the Tribes of Israel, was given to George Carey, Archbishop of Canterbury emeritus upon his receiving “The Simon Wiesenthal Centre International Humanitarian Award "in recognition of his activism and stalwart contribution to interfaith understanding and his friendship to the Jewish people.” 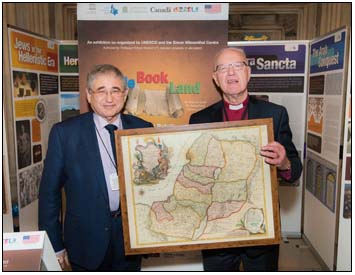 Samuels recognized the many Conservative, Labour and Liberal-Democrat Lords and MPs, as also those present who had played a role in the exhibition’s genesis and trajectory, among them: Ambassador Ron Adam, Michael Phillips, Edward Azouz, Joy Wolfe, Rabbi Lord Sacks and Raymond Simonson, who will host the exhibition from 27 March at JW3 in London.

“I feel privileged to open this exhibition in the land of my birth and my youth. Suffused with the values of the Judeo-Christian heritage and precursors of the rule of law, they are reflected in William Blake's: ‘Till we have built Jerusalem in England’s green and pleasant land.’ May these 24 panels help to engender mutual respect and acknowledgement of the other’s heritage as a vital step for peace,” concluded Samuels.

From UNESCO in Paris to the UN in New York, the US Congress, the Israeli Knesset, the Vatican, Copenhagen Town Hall, the New Delhi Gandhi Centre,now at the House of Commons, the exhibition will be displayed in mid-March in Buenos Aires.