Paris - On 9 January 2015, the “Hyper Cacher” supermarket in the outskirts of Paris was attacked by an Islamist gunman, who killed four, while screaming the cause of “Palestine”.

The victims were Yohan Cohen, a 20-year-old student and supermarket employee, Philippe Braham, a 45-year-old IT executive, François-Michel Saada, a 64-year-old retiree, and Yoav Hattab, a 22-year-old student who tried fighting back.

The assault had followed two days of terror in and around Paris, including the massacre of the Charlie Hebdo satirical weekly editorial staff - that had published caricatures of the Prophet Mohamed, deemed "blasphemous" by the terrorists - and the cold-blooded killing of police agents.

The connection between these events and the terror spree brought the Jewish victims into the limelight, mourned by heads of State and French Mayors participating in the “million people march” in Paris. For that occasion, the Wiesenthal Centre produced an immense balloon with the message: “I am Charlie, the Police, the Jews... I am the Republic.”

Samuels with the Wiesenthal Centre balloon and as it appeared in the news, with a line of French Mayors leading the rally.

While upstairs, in the supermarket, a Malian Muslim was killing Jews and spewing antisemitic hate on terrorized hostages, down below, in the storage area, a Malian Muslim was hiding Jewish shoppers in a large refrigerated room. He then managed to slip away and provide essential information for the ensuing Police raid.

Lassana Bathily was the hero of the day, and in March 2015, the Centre brought him to Los Angeles to receive its Medal of Valor award. 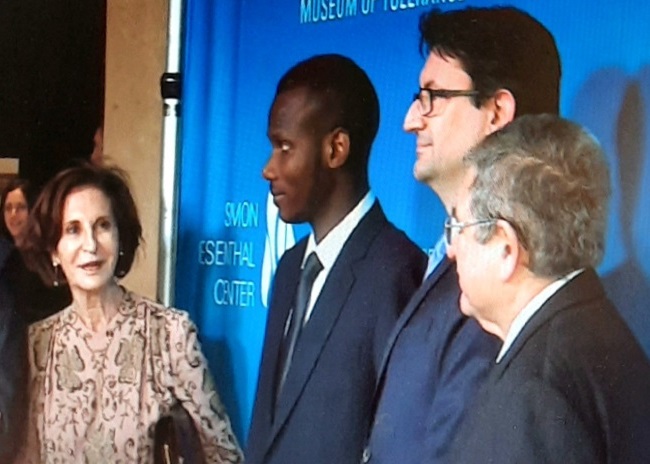 Together with the Consul-General of France, Lassana was taken to the French high school, where one student asked him if he would do it again. He responded: “Probably. My mother taught me my Islam, so yes, I would do it again!”

Another student asked him what he wished for. His response was: “I want a water pump and tower for my village in Mali, then a school and a clinic.”

As we landed back in Paris, he was jubilant when he turned on his smartphone: The French water company had agreed to build his village's water infrastructure. The Consul-General, in coordination with the city authorities, had organized a course for him, leading on to work with Muslim youth.

“Out of the darkness of hate and terror, was born faith and hope,” concluded Samuels.