Wiesenthal Centre Letter to Sadiq Khan, Mayor of London, on an Antidote Against the Hatred of Amnesty International

Paris - In a letter to London Mayor, Sadiq Khan, the Wiesenthal Centre Director for International Relations, Dr. Shimon Samuels, expressed the outrage of the Centre’s constituency, including supporters of the Simon Wiesenthal Centre - UK, at the abuse of the Israeli Embassy in Kensington.

Amnesty International UK Campaigns and Crisis Manager, Kristyan Benedict led a group to place a road signpost outside the Embassy, marked “Apartheid Avenue W8 - No Palestinians Allowed.” This was aimed at fomenting hate against the Jewish State and, thereby endangering British Jews. 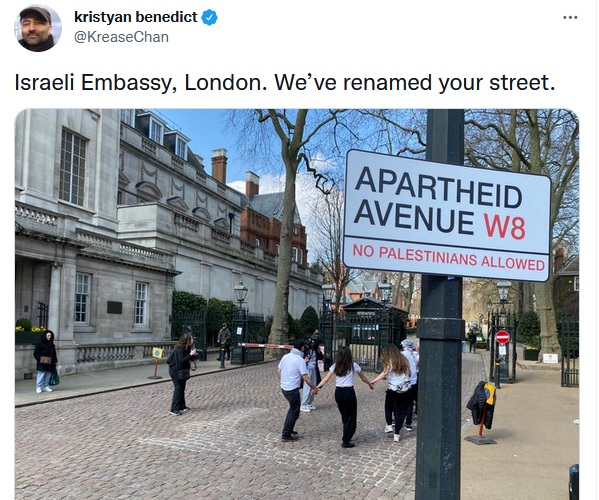 This is proof positive that Amnesty is in a profound abyss of antisemitism.

The letter continued, "We turn to you, Mr. Mayor, to offer a possible antidote, which has been helpful from Paris to Buenos Aires: a street in the name of our mentor, Simon Wiesenthal, in an appropriate place in London, where school classes could be brought to learn his story."

Wiesenthal was not only the paradigm of justice in bringing over a thousand mass murderers to trial, but also a fighter for human rights.

Austria, where he had resided after the war, had him join their delegation to the 50th anniversary of the United Nations, as also of the Universal Declaration of Human Rights, authored by French Jewish jurist René Cassin.

On that occasion, Wiesenthal focussed on the genocides in Bosnia and Rwanda.

“Mr. Mayor, we hope to work with you on a place for Simon Wiesenthal in London, where school classes could be brought to learn his story,” concluded Samuels.