Paris – The Wiesenthal Centre Director for International Relations, Dr. Shimon Samuels, joins the BNVCA (the French National Bureau of Vigilance Against Antisemitism) in solidarity with the small Jewish community of Béziers, whose President received an anonymous and ominous death threat. 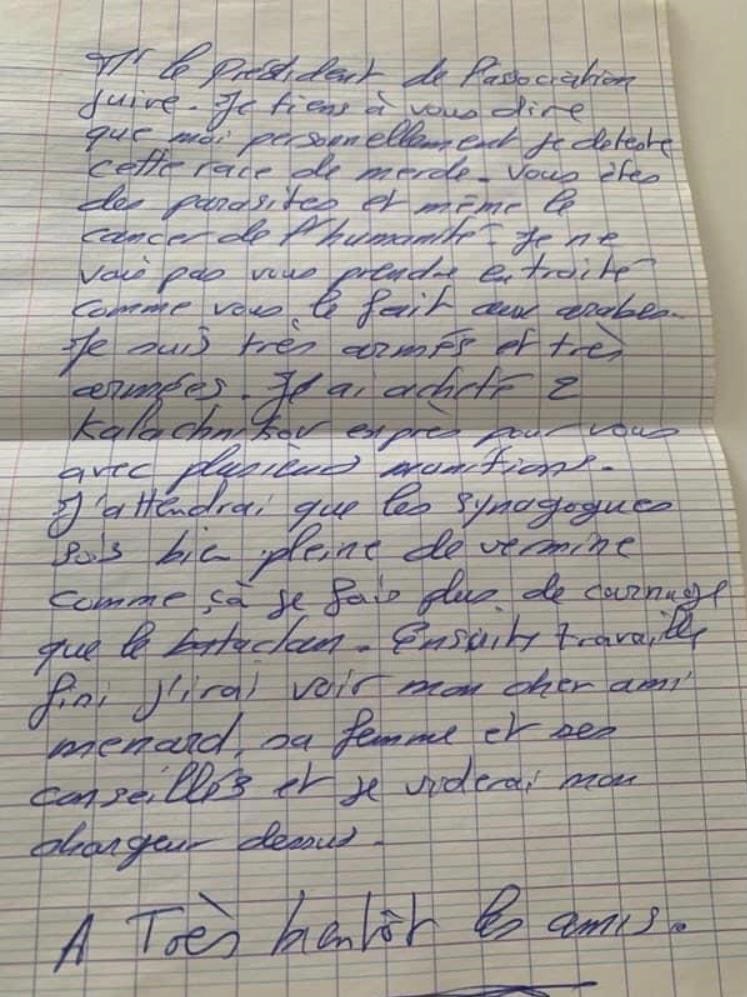 "Mr. President of the jewish association [of Béziers]. I want to tell you that I personaly detest this shitty race. You are parasites and the cancer of humanity. I won’t make a treaty with you, as you do with the arabs. I am very armed and very armed [sic!]. I bought 2 kalashnikov just for you with a lot of ammunition. I will wait until the synagogues will be full of vermin, so that I can do a bigger carnage than at the bataclan. Then, work finished [sic!], I will go see my dear friend menard, his wife and his councillos [sic!] and will empty my magazines on them.

See you very soon my friends."

The Centre stressed that, "this is not simply an example of hateful intent to commit murder, but is clearly antisemitic – from the author's opening definition of the Jews - and inspired by Jihadi terrorism – see the reference to the Bataclan theatre, that was attacked by a group of terrorists on 13 November 2015, leaving 130 dead." Although the killings were indiscriminate, the Bataclan was Jewish-owned and often hosted Jewish events.

The letter noted that, "Other elements almost go unnoticed, such as the bitterness towards the normalization of Israeli-Arab relations, or the promised attack on Béziers right-wing traditionalist Mayor Robert Ménard, formerly President of Reporters Sans Frontières. The addition of the Mayor's wife and councillors to the list of potential victims confirms the author's apocalyptic intentions, but also hints to the generic location of a wannabe lone-wolf terrorist."

Samuels added, "Next September will see the opening of the trial against 20 accomplices involved in the 13 November 2015 wave of terror in Paris, spanning from the football Stadium in Saint-Denis to the cafés next to the Bataclan, to the horrifying massacre in the theatre during a concert."..."We will be present at the trial proceedings"

"We express solidarity with those under menace in Béziers and call for heightened security from police forces and a rapid arrest of the author of this terrorist and antisemitic death threat." concluded Samuels.