“Calls for BDS are perhaps a cover-up for the over 800,000 Middle East and North African (MENA) Jews who fled pogroms from Iraq to Libya and were never compensated.”

PARIS - In a letter to French Foreign Affairs Minister, Jean-Yves Le Drian, the Centre’s Director for International Relations, Dr. Shimon Samuels, commended the exhibition “Jews of the Orient” - presently on display at the Institut du Monde Arabe (IMA - Arab World Institute), which is a “French Foundation” in partnership with the 22 member-states of the Arab League. It is, however, the French taxpayer who provides the entire IMA budget.

In the spirit of the Abraham Accords, this exhibition highlights the centuries of relations and cultural exchange between Jews and Muslims in the Arab World, through a rich selection of artifacts, photos and videos. It follows recent exhibitions on the “Hajj Muslim Pilgrimage to Mecca” and “Christians of the Orient: 2000 Years of History.” Now IMA focuses on the Jews of the Orient.

The IMA is now attacked, mainly by Arab “intellectuals,” for displaying artifacts from the Israel Museum and “normalization with ‘a colonial Apartheid State’.” This is a cover-up for BDS (Boycott, Divestment, Sanctions), a campaign that is reminiscent of Nazi Germany's "Do Not Buy from Jews" (Kauft nicht bei Juden). BDS is illegal under French law.

Samuels argued, “the petition is perhaps also a subterfuge to ignore the fact that over 800,000 MENA Jews fled pogroms in Arab countries and were never compensated for their loss of homes, businesses, synagogues, Jewish schools...” adding, as a reference, Lyn Julius’ book, “UPROOTED - How 3,000 Years of Jewish Civilization in the Arab World Vanished Overnight.” 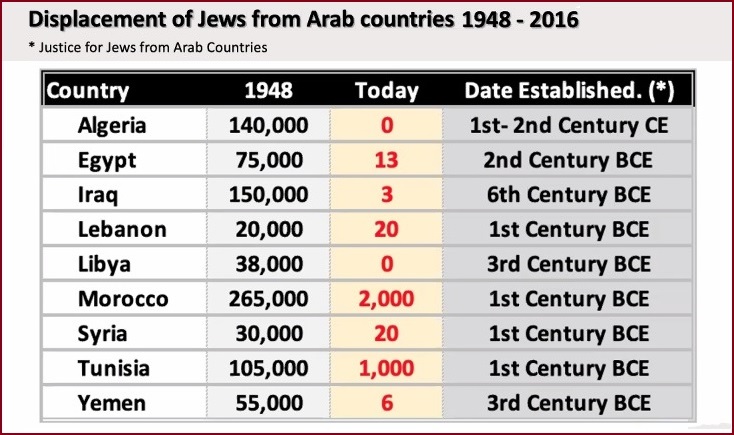 Most of those “Oriental” Jews left newly independent Algeria, Iraq, Libya, Syria, Yemen and other Arab countries and found refuge in their ancestral homeland, Israel. Others went to Europe, the United States and Latin America. The 800,000 were quickly absorbed and are an integral part of their respective societies. The 660,000 Palestinians had left the newborn Jewish State when a coalition of Arab armies attacked Israel. They were henceforth dubbed as “refugees,” although most of them resided on “Palestinian soil” - the Jordanian occupied “West Bank” and Gaza under the stern control of Egypt - between 1948 and 1967. Many of their descendants are still kept in such a status in neighbouring “host” countries.

Indeed, this was an exchange of populations, in the same manner as between India and Pakistan, or Turkey and Greece.

“Jews of the Orient” is to be on display until 13 March 2022 and attracts a wide and enthusiastic Jewish, Muslim and Gentile public to the IMA. Over the past 30 years, our Centre has drawn attention to its exhibitions that have included antisemitic features... Today, we commend this event.

“We now urge you, Mr. Foreign Affairs Minister, and IMA President, Jack Lang, to stand firm and ensure that this cultural exhibition be depoliticized and eventually be shown across the Arab World,” concluded Samuels.