According to the Uruguayan Ministry of Foreign Affairs, the best way to commemorate the Shoáh and its victims is to contain contemporary antisemitism.

Thus Uruguay has adopted the International Holocaust Remembrance Alliance (IHRA) working definition of antisemitism, an organization to which they are an Observer. 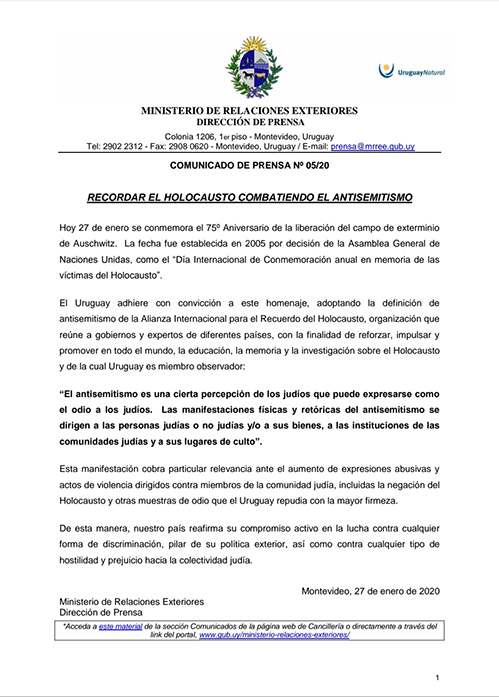 “Remembering the dead and honoring the survivors is important, but it is not enough to avoid new forms of violence, manifestations of hate and discrimination. The IHRA`s working definition of anti-Semitism is an instrument to detect antisemitic activities even when those who carry them out do not identify themselves as such and provide the States and institutions the ability to cut them at the root,” said Dr. Ariel Gelblung, Wiesenthal Center`s Latin American Director.

Dr. Shimon Samuels, Director for International Relations of the Centre, cited its mission statement "draws the lessons of the Holocaust to combat current discrimination, xenophobia, racism and antisemitism", concluded: “We applaud the decision of Uruguay, which sets an example for all Latin America. The entire Latin and Caribbean bloc should show solidarity in adopting the working definition and also join IHRA. A region that granted refuge to many Nazi criminals is obliged to battle antisemitism as state policy. ”