BUENOS AIRES and PARIS - In a letter to Argentine Foreign Minister, Felipe Solá (pictured), the Wiesenthal Center called for a declaration that it will not participate in the 20th anniversary of the infamous 'World Conference Against Racism' held in August 2001 in Durban, South Africa. 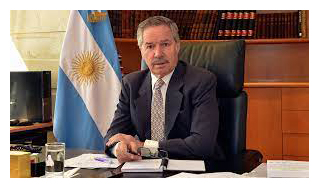 Expectations of diplomats and NGOs to establish a roadmap to combat hatred were dashed in the largest public display of anti-Semitism since the defeat of Nazi Germany.

During the conference, in addition to suffering physical attacks, the Durban police chief, on the eve of the Sabbath, declared that he could not guarantee the safety of the representatives of Jewish organizations to walk the three blocks through a demonstration of 20,000 with banners stating "Hitler was right!" distributing Jew-hatred flyers.

To date, the United States, Canada, and Australia have already stated their absence.

“Since the return of democracy, Argentina has rendered the defense of human rights as a government state policy. Except for justice pending for the 1992 terror attacks against the Israeli Embassy and in 1994 against the AMIA Jewish Center, both in Buenos Aires....it became clear that the fight against anti-Semitism was an essential part of its human rights campaign.

The Simon Wiesenthal Center urges you to add the important voice of Argentina and declare that it will not attend or participate in glorifying a conference that, 20 years ago, dishonored the United Nations and helped legitimize genocidal hatred against Jewish people everywhere... Attending would be a step backward for the policy of Argentine democracy and would isolate the fight against anti-Semitism from that of human rights," concluded Drs. Shimon Samuels and Ariel Gelblung, respectively, Directors for International Relations and for Latin America of the Wiesenthal Center.