Wiesenthal Center to University of Chile: "A Student Whose Paper Extolled Hitler as an Inspiration for Public Relations Must be Sanctioned"

Buenos Aires and Paris – In an open letter to Hugo Frühling, Director for Public Affairs at the University of Chile, the Directors for International Relations and for Latin America, Drs. Shimon Samuels and Ariel Gelblung, urged an exemplary sanction be applied to a student who presented a paper claiming that Adolf Hitler be acknowledged as an inspiration for leadership of a model thriving society.

The professor who was due to evaluate her work is of Jewish origin, whose family included Holocaust victims. He thus informed his superiors that he would not grade the paper and raised the matter to the University authorities. 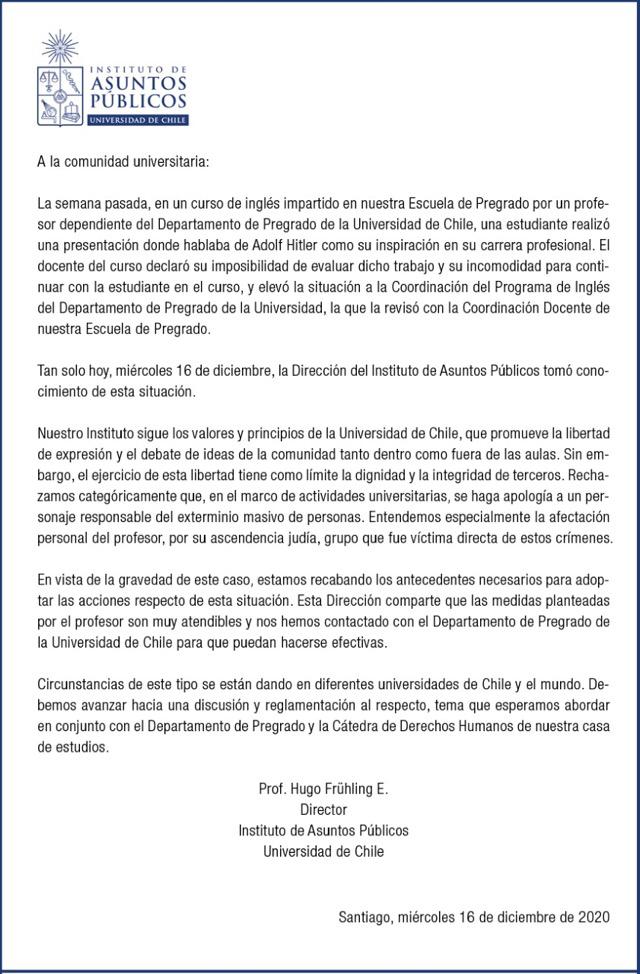 Immediately, an array of institutions supported the professor's decision and the University must now evaluate the decision to be taken.

The Center officials argued: “It should not be relevant that the profesor in question is of Jewish descent, nor that part of his family were Holocaust victims. Hence the nature of the sanction should be correlated with the student's possible lack of historical knowledge, or otherwise, to intentionally inflict pain on her teacher. The argument of freedom of expression is, in this case, fallacious, in that it justifies the infringement of the rights of others to incite hate."

"Hate speech, Mr. Director, should not be confused with freedom of expression, especially in a university environment."..."Defense of the principal perpetrator of genocide is tantamount an apology for the crime and incitement to hatred, even subject to a judicial response."

"A clear and concrete measure available to the University, to avoid such issues in the future, is the adoption of the International Holocaust Remembrance Alliance (IHRA) Definition of Antisemitism https://www.holocaustremembrance.com/es/resources/working-definitions-charters/definition-of-antisemitism-of-the-international-alliance. This step has been taken successfully in Europe and the Latin American region inter alia, by the National Universities of Cuyo, Tucumán, Buenos Aires and Del Litoral, among others in Argentina. To date, the Declaration has already been put into practice by Universities to avoid and/or sanction similar situations."

Drs. Samuels and Gelblung concluded by offering the University of Chile the full cooperation of the Wiesenthal Center.