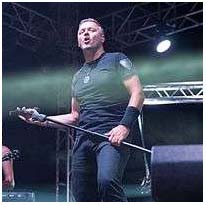 reception held in Zagreb this past Monday to welcome home their national football team, which surprisingly placed second in the recent World Cup competition held in Russia this past month.

In a statement issued here today by its chief Nazi-hunter and director of Eastern European Affairs, Dr. Efraim Zuroff, the Center noted that Thompson was notorious for singing songs which called for the murder of Serbs and related nostalgically to the notorious Croatian concentration camp Jasenovac and its adjacent womens' camp Stara Gradiska. By inviting Perkovic to sing at this mass celebration, at which no politicians or performers were scheduled to appear, gives his fascist views a legitimacy they do not deserve.

"Marko Perkovic has never missed an opportunity to transmit his hateful messages. It is no accident that numerous people show up at his concerts wearing Ustasha uniforms and/or symbols and give Ustasha salutes. He should not be an honored guest anywhere, let alone at one of the biggest gatherings in democratic Croatian history to celebrate a magnificent sporting achievement. Luka Modric might indeed have deserved to be World Cup Most Valuable Player, but for inviting Thompson to sing he deserves a red card."

For additional information please contact the Israel Office of the Wiesenthal Center: Tel: 972-2-563-1274 or Tel: 972-50-721-4156, join the Center on Facebook, www.facebook.com/simonwiesenthalcenter, or follow @simonwiesenthal @EZuroff for news updates sent direct to your Twitter feed.