BUENOS AIRES and PARIS - In separate letters addressed to the respective Foreign Ministers of Argentina, Felipe Solá (pictured left) and Mexico, Marcelo Luis Ebrard (pictured right), the Directors for International Relations and for Latin America of the Wiesenthal Center protested the position taken by these countries in the recent vote of the UN Human Rights Council against Israel. 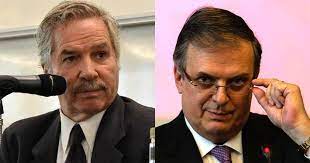 “On behalf of our worldwide 400,000 membership, we are outraged that the terrorist organization, Hamas, has been whitewashed and democratic Israel blackened or placed on an equal footing. . Hamas' charter establishes its objective not only to the destruction of Israel but the genocide of all Jews wherever they may live, including citizens in your countries.  Your stand serves to legitimize dictatorships identifying with a terrorist organization to condemn a democracy. We urge Argentina and Mexico to rethink their policies and not applaud such exercises in hate," stated Drs. Shimon Samuels and Ariel Gelblung.