Buenos Aires and Paris - The Chanukiá (Chanukah menorah) installed in a public space in Temuco, a city in southern Chile, was vandalized with the anti-Semitic inscriptions: "Synagogue = Satan", "Jews Out" and "Zionists Out.” 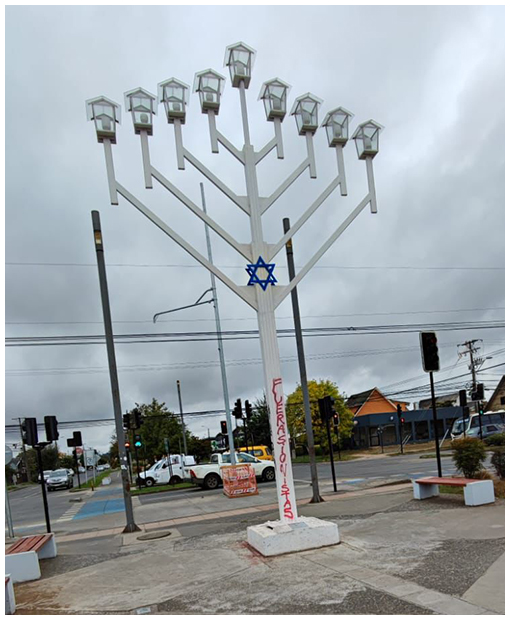 Dr. Ariel Gelblung, Simon Wiesenthal Center’s Director for Latin America, stated, “In the presence of a religious symbol such as the chanukiah in a public space in Chile, brings up the issue of freedom of worship and coexistence in diversity. Such vandalism is a clear and concrete anti-Semitic attack. The excuse that anti-Zionism and anti-Semitism are different terms falls apart when observing that those who spread hatred use both terms equally.”

“This is a unique opportunity for the recently inaugurated government that has claimed to be a ‘government for all’ to condemn this act and to demonstrate by adopting the International HolocauRA Definition of Antisemitism in line with states, predominantly in Europe and Latin America”, concluded Dr. Shimon Samuels, Director for International Relations.