Jerusalem-The Simon Wiesenthal Center today harshly criticized a march held this past Thursday in Kiev to mark the 106th anniversary of the birth of Ukrainian nationalist hero Stefan Bandera, who collaborated with the Nazis during 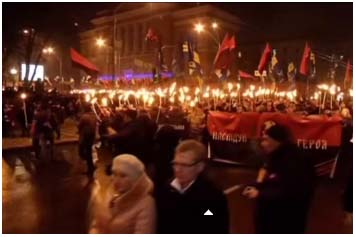 According to Zuroff:
"Holocaust perpetrators are the last people on earth who deserve to be glorified, regardless of their nationalist credentials. This phenomenon, currently so common in post-Communist Eastern Europe, and especially in Ukraine and the Baltics, clearly shows that these countries don't fully comprehend the obligations of true democracy."