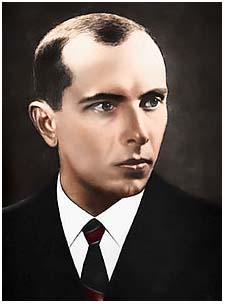 In a statement today, the Wiesenthal Center’s Director of Eastern European Affairs, Dr. Efraim Zuroff, and Mark Weitzman, the Center’s Director of Government Affairs, noted the active participation of members of the Organization of Ukrainian Nationalists (OUN), under Bandera’s command, in the mass murder of Jews during the initial weeks of the Nazi invasion of the Soviet Union in June, 1941.

“Glorifying the person whose men committed countless heinous crimes is an insult to the victims and an unthinkable distortion of the history of the world’s most horrific genocide," said Dr. Zuroff.

“Unfortunately in recent years, Ukraine has been one of the major propagators of a distorted version of Holocaust history which seeks to hide or minimize crimes committed by Ukrainian nationalists,” he added.

Weitzman added, "It is clear that Ukraine is choosing to rehabilitate antisemitism and to censor history.” He noted that, along with the Bandera national holiday, the Ukrainian region of Lviv announced that 2019 would be “Stepan Bandera Year” and that a book exploring the antisemitic actions of politician Simon Petlura, who led 1919 pogroms against Jews, was banned.

“By joining with other countries that are rewriting history Ukraine is showing how little it has learned from the tragedies of the past. These actions are a disgraceful affirmation of Ukraine’s darkest past and an absolute rejection of democratic values,” Weitzman concluded.