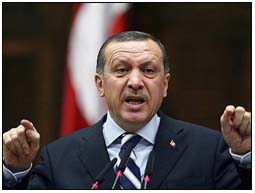 repudiate Turkish Prime Minister Recep Tayyip Erdogan who, at a rally in front of hundreds of thousands of supporters, compared Israel’s military actions in Gaza to Hitler’s saying,

They kill women so that they will not give birth to Palestinians; they kill babies so that they won't grow up; they kill men so they can't defend their country ... They will drown in the blood they shed.

“These lines are the words of a modern day Goebbels who believes if you repeat a lie often enough it will eventually be accepted as truth,” said Rabbi Marvin Hier, Founder and Dean of the Wiesenthal Center and Rabbi Abraham Cooper, the Center’s Associate Dean.

“After such a diatribe we fear for the safety of the Jewish communities in Turkey and in Europe. His calumny is virtually a warrant to attack Jews everywhere,” they added.

“The entire world knows what Erdogan would do if thousands of rockets were fired at his cities,” they added.

“The time has come for President Obama and the world’s leaders to rein Erdogan in and repudiate his unadulterated anti-Semitism,” Rabbis Hier and Cooper concluded.