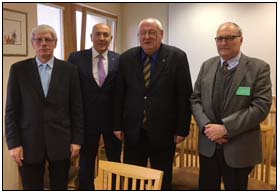 advisors in an effort to convince them to cancel their initiative to declare 2018 as the year to honor a Lithuanian anti-Communist partisan who commanded a unit of local insurgents who committed Holocaust crimes. Adolfas Ramanauskas (“Vanagas”) was the leader of the local Nazi collaborators in the town of Druskininkiai in southern Lithuania, who persecuted the Jews of that community during the initial weeks following the Nazi invasion of June 22, 1941.

At the meeting, Zuroff presented research and documents by Lithuanian journalist Evaldas Balciunas, which are publically available on www.defendinghistory.com, and which clearly point to Ramanauskas’ role as a leader of the pro-Nazi Lithuanian insurgents who actively persecuted Jews and Communists in the town in June and July 1941. Any participation in these crimes, Zuroff argued, should automatically disqualify a person from being declared a national hero. The decision of the Seimas must go through eight different stages before it is approved, and five have already been completed, in each case by unanimous vote.

“The arguments presented by Chairman Gumuliauskas about the objective work of professional historians sound incredibly hollow in a country in which there are several monuments to those who mass murdered Jews during the Holocaust. The decision to honor Ramanauskas is another outrageous decision in a country still reluctant to honestly confront the role of its nationals in Holocaust crimes.”


For additional information please contact the Israel Office of the Wiesenthal Center: Tel: 972-2-563-1274 or Tel: 972-50-721-4156, join the Center on Facebook,www.facebook.com/simonwiesenthalcenter, or follow @EZuroff & @simonwiesenthal for news updates sent direct to your Twitter feed.