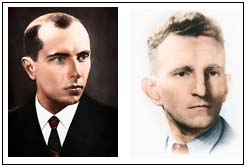 In a letter of support sent today to Boris Fuchsmann, President of the Jewish Confederation of Ukraine, the Center expressed its strong opposition to the glorification of the two Ukrainian nationalist leaders whose men actively participated in the mass murder of Jews during the initial months following the Nazi occupation of the Soviet Union.

"Thank you for alerting us to the impending decision of the Kiev Municipal Council regarding the scandalous initiative to name city streets in honor of Ukrainian nationalists Stefan Bandera and Roman Shukhevych, whose men assisted the forces of Nazi Germany following the invasion of the Soviet Union on June 22, 1941 and actively participated in the mass murder of Jews in Lviv and other locations.

"We absolutely oppose and condemn any attempt to turn murderers in the service of the Nazis into Ukrainian heroes. Such a policy is not only an insult to the memory of their innocent victims, but an affront to human dignity and historical truth."

For additional information please contact the Israel office of the Wiesenthal Center: Tel: 972-2-563-1274 or Tel: 972-50-721-4156, join the Center on Facebook, www.facebook.com/simonwiesenthalcenter, or follow @simonwiesenthal @EZurofffor news updates sent direct to your Twitter feed.
The Simon Wiesenthal Center is one of the largest international Jewish human rights organizations with over 400,000 member families in the United States. It is an NGO at international agencies including the United Nations, UNESCO, the OSCE, the OAS, the Council of Europe and the Latin American Parliament (Parlatino).