Buenos Aires and Paris – In 2006, a private expedition recovered the Nazi Swastika and eagle prow of the Admiral Graf Spee pocket battleship along with its rangefinder and canons,scuttled in Montevideo harbour in December 1939. It had sustained 70 hits from British warships in the Battle of the River Plate. Since then, the 6 foot crest has been stored in an Uruguay warehouse.

Now, a judge has determined the future of these objects: public auction. Without deference for institutions and individual bidders whose aim would be identified clearly as pedagogical, to draw the lessons of the Holocaust and other genocides. 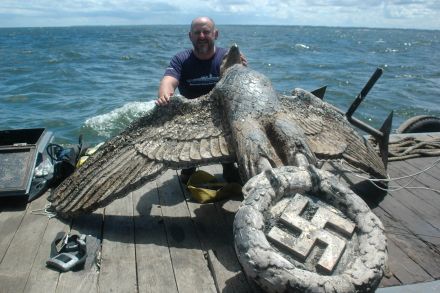 “Both the German authorities and the Wiesenthal Center, have taken the position that such artifacts can not serve a growing  extreme right market and white supremacists or even a sick trafficking, as in a bid to display the swastika eagle at the World Cup in Doha, Qatar.... We urge the Uruguayan authorities to ensure that the display of these symbols serve as a warning to future generations of what should never be repeated,” said Dr. Shimon Samuels, Director of International Relations at the Wiesenthal Center.

Dr. Ariel Gelblung, Director for Latin America, concluded: “On January 27, Uruguay adopted the IHRA Definition of Antisemitism officially stating that this was the best tribute to the victims of Nazism. Today, it must implement this measure, which includes preventing the public use of symbols that recall ethnic cleansing. Potential buyers must be advised that if the destination of the objects is not to pose a warning, the auction must be renegotiated. ”