Berlin-The Simon Wiesenthal Center's chief Nazi-hunter Dr. Efraim Zuroff (pictured left) met today in Berlin with Dr. Felix Klein, the German Commissioner for the Fight against Anti-Semitism (pictured right). The meeting was held to honor Israeli Holocaust survivor Emil Farkash, who is going to testify this coming Thursday in the trial of Nazi SS guard in the Sachsenhausen concentration camp, Josef Schuetz. Dr. Zuroff had identified Emil Farkash as a survivor of Sachsenhausen and brought him to the knowledge of the German prosecution. Dr. Zuroff was appointed as an official escort for Mr. Farkash's trip to Germany and testimony in the case. 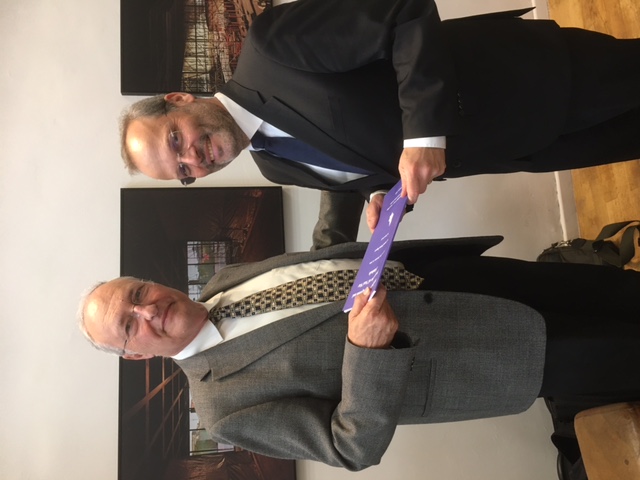 Dr. Klein praised the work of the Simon Wiesenthal Center in helping to facilitate the prosecution of Nazi war criminals and discussed issues concerning the continuation of the trial. Dr. Zuroff brought up the issue of the failure hitherto to prosecute any members of the Einsatzgruppen (special mobile killing units) and Dr. Klein indicated his willingness to discuss the matter with German legal authorities.

According to Dr. Zuroff:

"I was very pleased to meet with Dr. Klein, whose efforts to help combat anti-Semitism in Germany are very noteworthy. It is also very good that he acknowledged the role of the prosecution of Nazi war criminals as an important component in the fight against contemporary anti-Semitism."