Córdoba, Argentina and Paris, France - In July 2021, the Professional Football League (LPF) - affiliated with the Argentinian Football Association (AFA) - which brings together the clubs of the first division and manages its championships, stated, “Among the 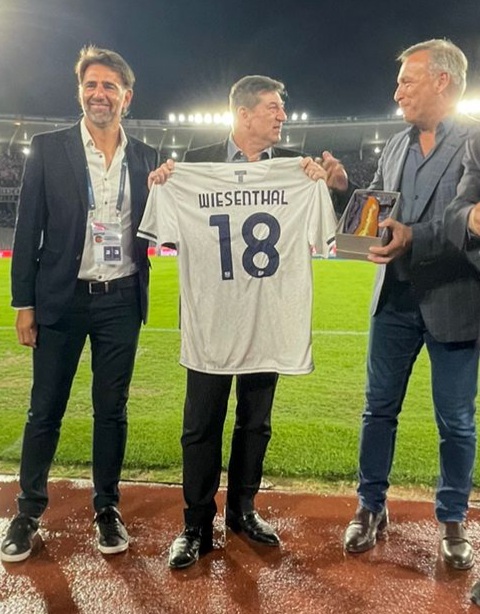 greatest scourges that threaten social coexistence in the world are racism, anti-Semitism, discrimination and hatred."

Based on this premise, LPF issued a notice that invited its member clubs to individually declare their adoption of the IHRA Definition on Antisemitism "as a way to educate, raise awareness and promote the values of coexistence in diversity."

LPF also invited its members to organize joint activities with the Simon Wiesenthal Center for this purpose. Among them, it was proposed to create the “Simon Wiesenthal Award”. This will be presented at the end of each LPF championship to the leadership, team or player that contributed the most to promote the values described above.

Sunday, in the run-up to the last match of the championship, the LPF and the Center delivered the “Simon Wiesenthal Award” to Club Talleres, of the City of Córdoba, Argentina, at the stadium, which not only immediately adopted the definition, but also showed a strong commitment to the values that this award embodies.

Dr. Shimon Samuels, Director for International Relations of the Wiesenthal Center stated, “Talleres, in Latin America, has followed  the European  examples set by Chelsea in the UK, Borussia Dortmund in Germany and AJAX in the Netherlands. Such clubs are landmarks of best practice, conveying a message against hate that we will share to be adopted by FIFA."

“We set an objective in July while working with LPF, certain that it would be our first award winner. We can affirm that Talleres has risen to the challenge. We expect that their example will spread to the rest of the institutions, some of which have already started working with us,” concluded Dr. Ariel Gelblung, Director for Latin America.