Buenos Aires and Paris - The Venezuelan cities of Chacao, Baruta and El Hatillo, State of Miranda, this week issued a Joint Manifesto against Anti-Semitism. Its content includes approval of the IHRA Definition of Antisemitism. 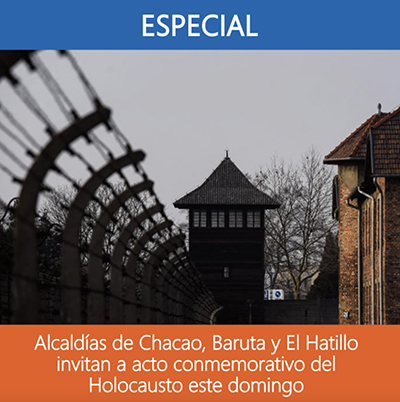 This serves as an invitation to national, state and municipal authorities as well as private institutions to continue this path. Another commitment urges education in primary schools on the Holocaust.

Dr. Ariel Gelblung, Director of the Wiesenthal Center for Latin America commented, “We have cooperated by providing content to the promoters of this revolutionary campaign. We are committed  to promoting this programme throughout the continent.”

“Venezuela is a dictatorship that broke off relations with Israel, is an active ally of Iran that denies the Holocaust and provides refuge to members of Hezbollah, while 75% of a once-thriving Jewish community have left the country. The programme of anti-Maduro municipalities is an exciting step to democracy. Their focus on Israeli democracy, antisemitism, and the dangers of Hizbollah terrorism and Iranian genocidal intent will continue with the support of the Wiesenthal Centre,” concluded Dr. Shimon Samuels, Center’s Director for International Relations.