The Wiesenthal Centre uncovered Fuenmayor Toro's (a Holocaust denier with public calls for an end to Israel's existence) ties to the terrorist groups Hamas and Hezbollah. He is also typically known for his brutal abuse.even of his own son. Fuenmayor Toro has been censured by social networks for exceeding freedom of expression and delisted by the German Embassy in Caracas. 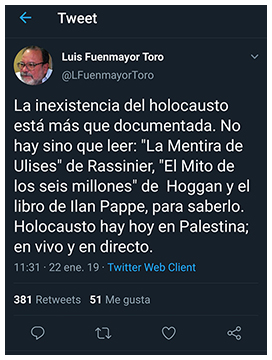 "The Chavista regime joins Iran in vile state policy to broadcast the denial of the Holocaust... From there it is a small step to target contemporary Jews worldwide”, noted the Centre.

“The proof was the 1994 AMIA Buenos Aires Jewish Centre bombing, with 85 dead and over 300 wounded - according to INTERPOL,“ stated the Centre’s Director for Latin America, Dr Ariel Gelblung.

“The Holocaust is a lie, let us make it a reality," has become Iranian policy. Its agency, the terror network, Hizbollah, as sleepers across the Americas...The slain AMIA Prosecutor, Alberto Nisman, shared with the Wiesenthal Centre, his findings of Iran's cells from Argentina via Trinidad to Surinam with headquarters in Venezuela,” recalled Dr. Shimon Samuels, SWC Director for International Relations.