The Center`s Director for International Relations, Dr. Shimon Samuels and Director for Latin America, Dr. Ariel Gelblung, expressed solidarity with CONIB, the leadership of Brazilian Jewry, in signaling the xenophobic and Holocaust Denial of the AfD.

They highlighted how the AfD justified the attempt to take over the Washington Capitol on January 6.

President Bolsonaro claimed that he was receiving a democratically elected deputy and that he had discussed with her common values. 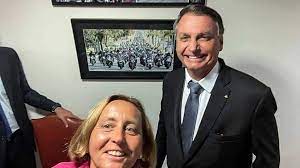 Gelblung commented that “there are no common values between a country historically open to immigration with respect for all cultures, such as Brazil, and could not be considered in parallel with the xenophobic and racist message of the AfD… Likewise, it is incompatible that Brazil is applying to join the International Alliance for the Remembrance of the Holocaust (IHRA), while at the same time receiving reportedly a movement supported by neo-Nazi sympathizers."

Samuels expressed concern regarding “who organized the Presidential meeting and with whom else the visitors met during their stay in Brazil," adding, “Latin America provided post-World War II sanctuary to thousands of fleeing Nazi murderers, including to Brazil, where Josef Mengele the `Angel of Death`ended his days… their progeny and admirers must not be incentivated by the antisemitism in today´s Germany, stoked by supporters of the AfD.. We call on the Serviço Nacional de Informações (SNI Secret Service) to investigate the situation.”