The Organization of American States Ratifies Cooperation with the Wiesenthal Center

BUENOS AIRES +  PARIS —On a call this morning, the Secretary-General of the Organization of American States (OAS), Luis Almagro, and the Simon Wiesenthal Center's Latin American Director, Dr. Ariel Gelblung, each agreed that the OAS would provide all the necessary cooperation to the future Commissioner for anti-Semitism, a position recently created by the OAS. 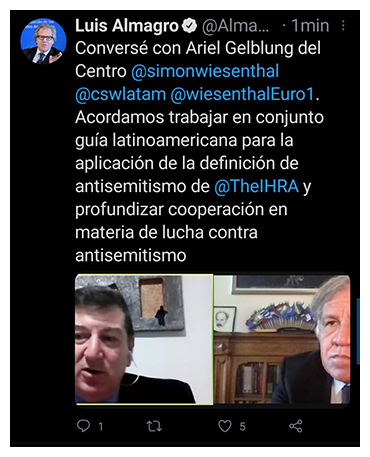 Almagro highlighted the role of the Wiesenthal Center in the practical application of the International Holocaust Remembrance Alliance (IHRA) Working Definition of Antisemitism and stated that all this information will be useful for adaptation of the European Union Handbook, already released to Latin America.

"In line with the document signed between both institutions after the last General Assembly, in which we jointly urged the nations of the American continent to adopt the definition as a concrete way to fight anti-Semitism, we ratify the close cooperation at the service of the OAS," stated the Director of International Relations of the Wiesenthal Center, Dr. Shimon Samuels.

Dr. Ariel Gelblung, Director for Latin America, concluded “Consistent with the commitment of Secretary-General Almagro, the creation of the position of Commissioner for Anti-Semitism of the OAS, the receptivity in the constant cooperation with our institution, the permanent dialogue and the recognition of our experience in regional cases to create a new handbook for public officials that allow us to create better elements in the day-to-day fight against Judeophobia, is a concrete reason to be proud."