“We welcome the UNAOC’s leadership in assembling world leaders to outline efforts to combat rising antisemitism,’’ said Eric J. Greenberg, SWC’s Director of United Nations Relations and Strategic Partnerships, who attended the special session.  “This conference could not be timelier, especially at this dangerous period in history when Holocaust denial and distortion, false conspiracies about Jews, anti-Semitism and anti-Zionism – attacking the right of Jews to live in their own state – continues to grow at alarming rates.  We agree that much more education and action is required to counter the alarming hatred being distributed on the internet and social platforms.”

Rabbi Abraham Cooper, SWC’s Associate Dean and Director of Global Social Action said he hoped the powerful words delivered at the conference will translate into concrete actions by the organizations and individuals who delivered the presentation. 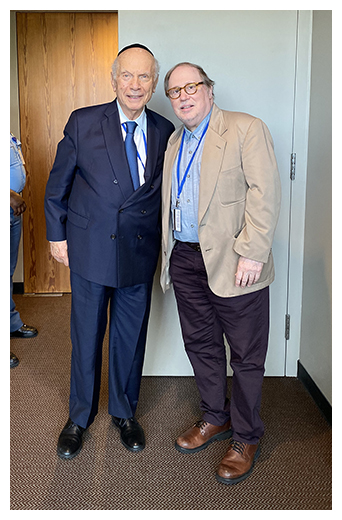 platforms. The Simon Wiesenthal Center, as a long-time NGO at the United Nations, is ready to work with all agencies and NGOs and contribute its expertise to counter anti-Semitism.”

“As these experts look into the sources of this rampant anti-Semitism, they must also include United Nations agencies themselves, such as the UN Human Rights Council’s anti-Israel Commission of Inquiry and UNWRA (The United Nations Relief and Works Agency for Palestine Refugees in the Near East) whose curriculum and schools continue to teach Palestinian children to revere terrorists who murder Jews and whose maps still deny the very existence and legitimacy of the lone Jewish state.”

The conference also heard from noted rabbi and Holocaust survivor Arthur Schneier (pictured with Eric J. Greenberg), who at 92 years old captivated the room with his eyewitness recollections of the Shoah (Holocaust). Schneier told the world leaders that he would never have believed that 78 years after his liberation at the end of the Shoah he would still be fighting against violent Jew-hatred.

The Simon Wiesenthal Center is one of the largest international Jewish human rights organizations with over 400,000 member families in the United States. It is an NGO at international agencies including the United Nations, UNESCO, the OSCE, the OAS, the Council of Europe, and the Latin American Parliament (Parlatino).