BUENOS AIRES and PARIS - At the fourth term inauguration of Nicaraguan President Daniel Ortega, where Argentine Ambassador, Daniel Capitanich, amongst others, were present, Mohsen Rezai was received with honor. Rezai is one of two high-ranking officials sought by an INTERPOL Red Notice for his involvement in the  Asociación Mutual Israelita Argentina (AMIA) bombing in Buenos Aires, Argentina in 1994, which killed 85 people and injured hundreds.

The Argentine Foreign Ministry issued two statements. In the first one, the Ministry condemned the presence of Reazai, (considered a fugitive) and again, appealed to  Iran to collaborate with the Argentinian justice system. The statement also urged the cooperation in the capture of Ahmad Vahidi, another Iranian officer wanted in connection to the AMIA bombing.

A second statement was issued by the Ministry urging the cooperation of Nicaragua, given the ties of friendship, to obtain the appearance of Rezai. 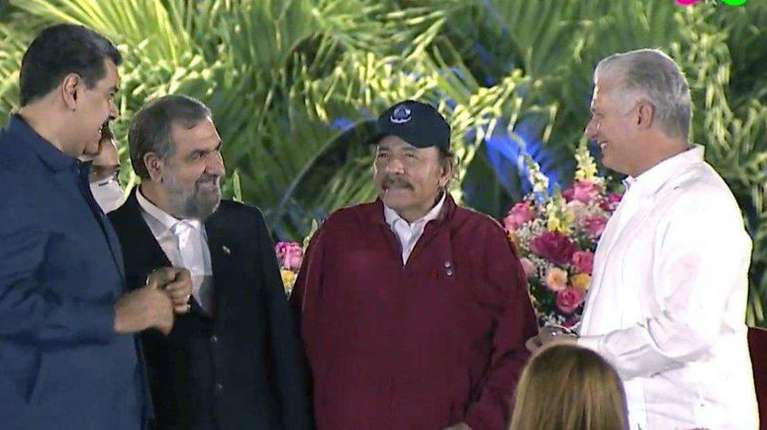 PHOTO: The Iranian official accused of the attack on the AMIA along with Ortega, Maduro and Díaz Canel

Dr. Ariel Gelblung, Director of the Wiesenthal Center for Latin America, stated, “Although we value the second statement, we understand that it [the Ministry] should have acted earlier, protesting against the invitation and requesting the Nicaraguan government to arrest the Reazai. So far we have not heard an official action against the Argentine ambassador, Daniel Capitanich, who shared the acts with Rezai. We call the attention of the Argentine Government to keep in mind all the official acts in the future in the rest of the countries of the region to foresee the corresponding activity."

Dr. Shimon Samuels, Director for International Relations, concluded by recalling the seminar that the Center held in the British Parliament with the Argentine Ambassador in London in 2018, to ensure that if those involved in the attack ever landed on British soil, they would be detained for their extradition to Buenos Aires to be tried. Latin America should do no less.