"Congressman Hastings was a civil rights activist and strong friend of Israel who was not only an American but also an international leader in the fight against racism and anti-Semitism. As the first and only American elected to lead the OSCE Parliamentary Assembly he made sure that American foreign policy reflected these concerns, said Rabbi Abraham Cooper, the SWC's Associate Dean and Mark Weitzman, the Center's Director of Government Affairs on the passing of 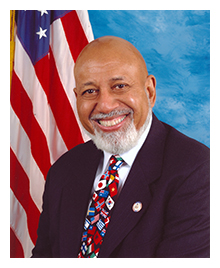 As we observe Yom HaShoah, Holocaust Memorial Day, we recall Congressman Hastings' statement last January, "Throughout my time in Congress, I have supported both Holocaust education and the academic freedom necessary to achieve it. … I have condemned Holocaust trivialization and revisionism.  I have supported efforts in the United States and around the globe to counter anti-Semitism, racism, and xenophobia."

“Congressman Hastings has left a legacy that is an inspiration to all who continue to fight racism, anti-Semitism and bigotry,” Cooper and Weitzman concluded.