LOS ANGELES  - The Simon Wiesenthal Center (SWC) condemns Kanye West’s latest anti-Semitic comments he shared with disgraced far-right host Alex Jones on InfoWars where the social influencer said “well, I see good things about Hitler…every human being has value that they brought to the table, especially Hitler…we’ve got to stop dissing the Nazis all the time.”

“History teaches us that words and ideas can have profound consequences. Kanye West’s serial anti-Semitism is now accompanied with the deconstruction of evil. Louis Farrakhan, America’s godfather of hate called Hitler ‘a great man.’ Following in his footsteps, Kanye West—influencer of millions—now touts Hitler as ‘bringing something of value to the table.’ Yes Kanye, what Hitler brought to the table was genocide, racism, and a world war that killed tens of millions and almost destroyed our civilization. Before he had the power to act, back in 1919, Hitler already outlined his vision of ‘the final removal of Jews.’” 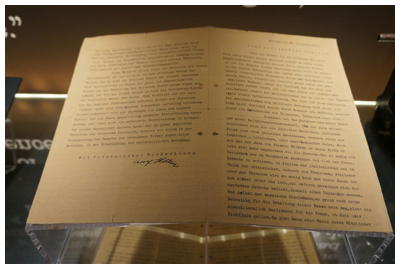 On September 16, 1919, Adolf Hitler wrote The Hitler Letter, six years before Mein Kampf. In it, Hitler outlined his plan calling for, “the uncompromising removal of the Jews altogether.” The letter, which can be found in the Museum of Tolerance at the SWC, is a shocking reminder that the indestructible roots of anti-Semitism and hate are flourishing once again, only 70 years after the Holocaust.