SWC: Israel Should Reject a Return to 1967 'Auschwitz' Borders

"Auschwitz" Borders:  A term coined by Israel's Foreign Minister Abba Eban who warned that a return to pre-1967
Six Day War borders would be Auschwitz borders for Israel. 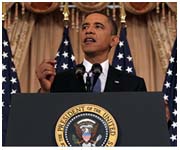 democratization in the Arab world but expressed deep disappointment that he called for Israel's return to the pre-June 1967 borders.

"We welcome the President's recognition of Israel's security needs and that Hamas cannot be a partner in the peace process, but a call to a return to 1967 borders as the basis for negotiations, even with 'land swaps' is a non-starter, when at least half of the Palestinian rulers are committed to Israel's destruction," said Rabbis Marvin Hier and Abraham Cooper, founder and dean, and associate dean of the Simon Wiesenthal Center.

"The road to peace has been clear for a long time - direct negotiations between parties who recognize each other's legitimacy,” they concluded.