The Simon Wiesenthal Center hails the overwhelming vote in the United Nations General Assembly today to suspend Russia from the UN Human Rights Council.  The vote was 93 approved, 24 against and 58 abstentions. 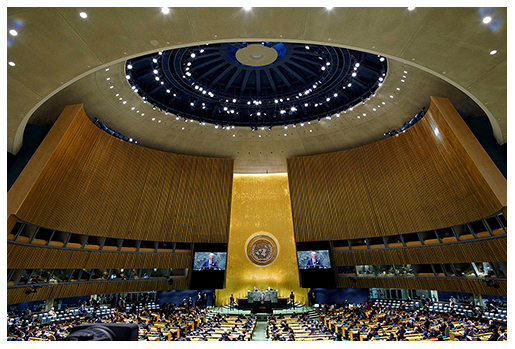 during this brutal, unprovoked invasion of a sovereign nation,” said Eric J. Greenberg, Director of United Nations Relations and Strategic Partnerships for the Simon Wiesenthal Center. “We respect the seriousness of this moment as this is the first time in the history of the UN that a permanent member of the UN Security Council has ever had its membership revoked from a UN body.“

Referring to allegations of Russia’s war crimes and the discovery of mass graves of Ukrainians in recent days, SWC Associate Dean and Director of Global Social Action Agenda, Rabbi Abraham Cooper said:  “This is why an organization bearing the name of Simon Wiesenthal cannot be silent or rest until the attacks and killing of Ukrainian civilians stop, and the murderers be brought to justice.”

Next, SWC reiterates its call on the United Nations to move the UNESCO meeting from Russia hosting a world conference on protecting cultural and natural heritage sites in June. Currently, the United Nations Educational, Scientific and Cultural Organization (UNESCO) is planning to hold the conference in Kazan, Russia. “Allowing this to occur would make a mockery of the conference,” Cooper said.

The Wiesenthal Center is an NGO to UNESCO and the only Jewish organization accredited to the World Heritage Committee. The World Heritage Convention is charged with addressing the protection of world cultural and natural heritage sites.  Russia has been destroying cultural sites – including Holocaust memorials – during its war in Ukraine.

Dr. Shimon Samuels, SWC’s Director for International Affairs called for the conference to be shifted to UNESCO’s Paris headquarters. Samuels said if UNESCO officials don't change the venue, “the Wiesenthal Center would not be attending.”