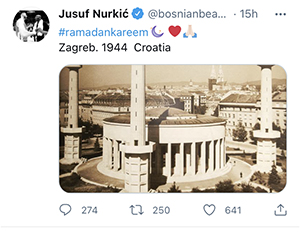 platforms. The post was a photograph of a Zagreb (Croatia) mosque, which was originally built as a museum in 1938, but was turned into a mosque by the fascist Ustasha regime in 1943, as a gesture to honor the support of Bosnian Moslems for the genocidal regime of the Ustasha. The Ustasha carried out a policy of genocide against Serbs, Jews, and Roma, and also murdered thousands of anti-fascist Catholic Croatians.

If Nukric’s motivation was to express support or sympathy or nostalgia for the Ustasha, who murdered hundreds of thousands of innocent residents of Croatia, the SWC unequivocally denounces such statements.

The posts have since been deleted.