The Simon Wiesenthal Center (SWC) recently bestowed its International Leadership Award to Souad Mekhennet, before a group of 200 Community leaders and diplomats at the Museum of Tolerance in Los Angeles.

Ms. Mekhennet was recognized for her diverse and courageous work as a journalist and author. Ms. Mekhennet uncovered the whereabouts of one of the most wanted Nazi war criminals, Dr. Aribert Heim, in the face of grave danger to her personal safety. She is the first person of Muslim descent to ever help solve the case of a most wanted Nazi war criminal. Ms. Mekhennet was able to do so through her courage and journalistic skill, smuggling out the Nazi doctor’s briefcase at great risk to her life and liberty. As a result, the Wiesenthal Center, in collaboration with the relevant authorities, was able to examine hand written letters and other documentary evidence to establish the man living under the name of Tarik Hussein Farid in Cairo, had indeed been Aribert Heim. 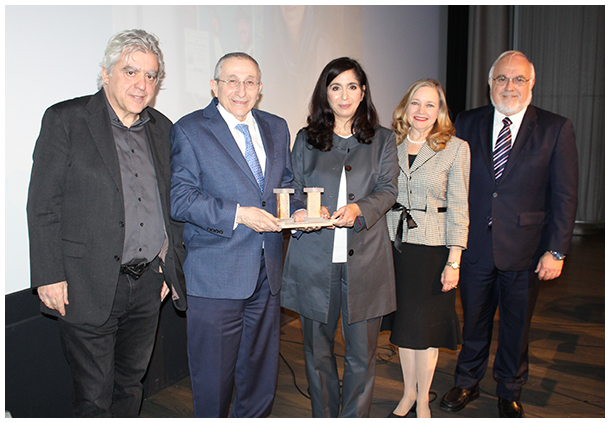 Ms. Mekhennet was later jailed while reporting on the Arab Spring in Egypt. During her interrogation, the Egyptian authorities brought up her involvement in the Heim case because the Egyptian government was apparently upset about the bad publicity confirming that the Nazi doctor had been living as a free man in Egypt for decades. While detained, she was threatened with rape and had a gun pointed at her head.
This did not deter her from further acts of journalistic courage. She has continued to cover difficult topics in dangerous places despite the risk to her safety. And always she provided, accurate and unbiased reporting, including her interviews with leaders of al Qaeda, the Taliban, and ISIS.

In her acceptance speech Souad declared:

The work of Simon Wiesenthal and his contemporaries motivate me to investigate crimes against humanity. In order to prevent these atrocities, we must understand root causes: how it came to be that people aligned with and acted on dehumanizing ideologies in the past and today. Therefore, I have focused my reporting career on extremism.

What matters is that I bring untold stories from the darkness of mankind into the light of consciousness. I give voice to victims. I write their stories. I unmask those who have dehumanized them.

In recognizing me for international leadership, the Simon Wiesenthal Center offers hope to the victims whose life stories I tell. Mostly people like me, who transcend traditional narratives and are forces for unity across boundaries and borders…

“Souad Mekhennet can serve as role model for millions of people, whatever their faith, creed, or nationality, said Rabbi Abraham Cooper Associate Dean and Director of Global Social Action Agenda for the leading Jewish human rights Agenda. “Souad wasn’t honored because she is a Muslim of Moroccan and Turkish descent, but the fact that she is being honored by a Jewish NGO for her integrity and courageous commitment to shining light on forgotten victims of man’s inhumanity to man, would have made our namesake proud of this recognition and serve to inspire people around the world”, Cooper noted.

The award, candlesticks made from Jerusalem stone was presented by Rabbi Marvin Hier, Dean and Founder of the SWC, Liebe Geft, Director of the Museum of Tolerance, Rabbi Cooper and David Suissa, publisher of The Jewish Journal.