The Simon Wiesenthal Center is releasing its annual Global Anti-Semitism Top Ten list. 2021 was dominated by the COVID pandemic but also saw history’s oldest virus – anti-Semitism – infect the mainstream of culture, academia, and media on both sides of the 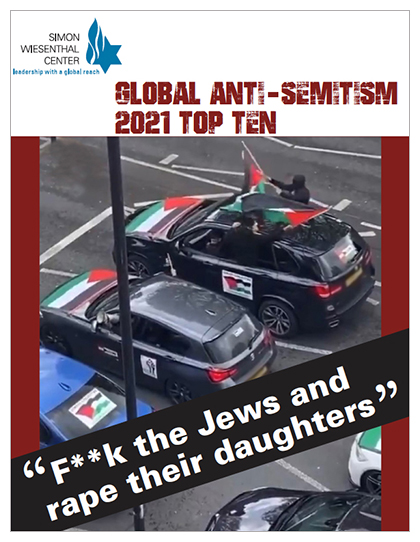 Atlantic and across powerful social media.

Among the other items on the Top Ten are Hamas-inspired violent attacks against Jews from Germany to the US; the BBC & the UK.; Unilever; Jewish Voices for Peace; University of Southern California; Social media giants Twitter, Telegram and TikTok; Council on American-Islamic Relations (CAIR) & Sunrise Movement.

The report is also available in Spanish: www.wiesenthal.com/TopTen2021_Espanol

For further information, please email Michele Alkin, Director of Global Communications at malkin@wiesenthal.com or call at 310-739-8063 or Shawn Rodgers at srodgers@wiesenthal.com

ABOUT THE SIMON WIESENTHAL CENTER

The Simon Wiesenthal Center is a Jewish global human rights organization researching the Holocaust and hate in a historic and contemporary context. The Center confronts anti-Semitism, hate and terrorism, promotes human rights and dignity, stands with Israel, defends the safety of Jews worldwide, and teaches the lessons of the Holocaust for future generations. With a constituency of over 400,000 households in the United States, it is accredited as an NGO at international organizations including the United Nations, UNESCO, OSCE, Organization of American States (OAS), the Latin American Parliament (PARLATINO) and the Council of Europe. Headquartered in Los Angeles, the Simon Wiesenthal Center maintains offices in New York, Toronto, Miami, Chicago, Paris, Buenos Aires, and Jerusalem.