Accepting the document, Pope Francis denounced surging anti-Semitism and stressed the importance of “recalling history so it can be of service to the future.”

VATICAN CITY — A 30-member Simon Wiesenthal Center (SWC) international delegation met with Pope Francis on Wednesday to present a facsimile of an original report authored and signed by Adolf Hitler in which he openly espouses the destruction of the Jewish people by “a government of national strength.”

The facsimile, whose original is displayed at the SWC’s Museum of Tolerance in Los Angeles, was presented to His Holiness by SWC founder and CEO Rabbi Marvin Hier and Dawn Arnall, chairwoman of the leading NGO for Jewish human rights. 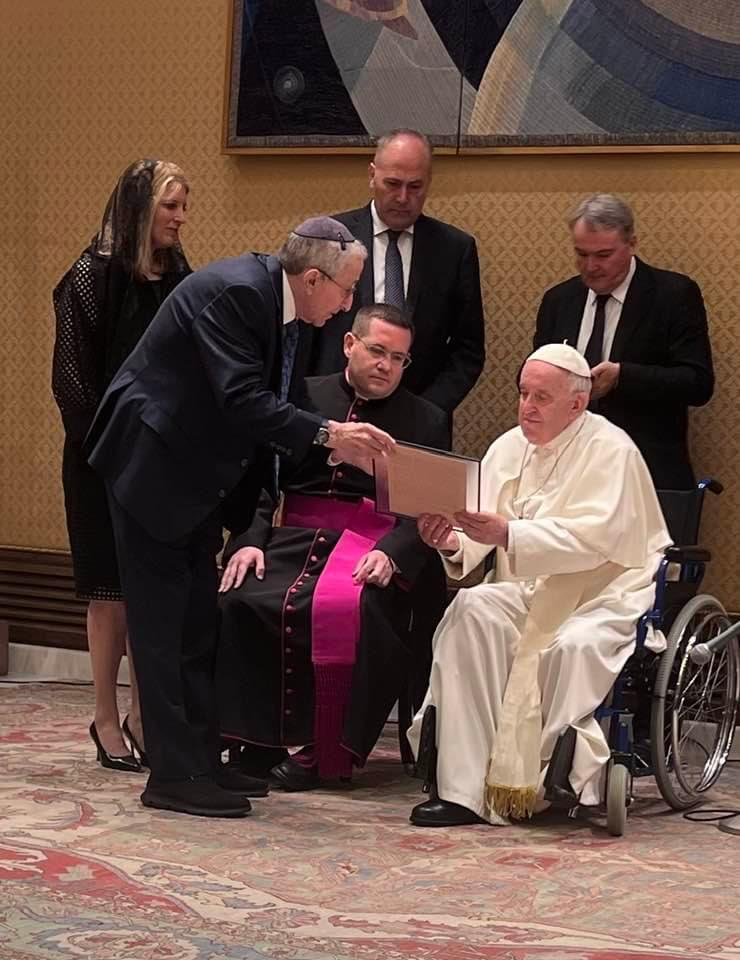 In Rabbi Hier’s remarks to Pope Francis, the Jewish leader first enumerated the horrific statistics on both sides of the Atlantic, which confirm surging anti-Semitism, including violent hate crimes.

In Pope Francis’ remarks, he responded by thanking the Simon Wiesenthal Center for protecting the memory of the past. Rabbi Hier then spoke about the human rights organization’s namesake, Holocaust survivor turned Nazi hunter, Simon Wiesenthal, and how he would react to current events.

“Against such a tidal wave of hate, Simon would ask, ‘How could it possibly be that the world’s leaders knowing what’s happening still want to make a deal with Iran on nuclear weapons when her leaders deny that there ever was an Auschwitz or a Treblinka; who continues to preach that no Jews were ever murdered in gas chambers? How can the United Nations and the world trust a regime, which for the last 43 years, has never deviated from those notorious lies?’”

“If that is not scary enough, look at what Putin’s Russia is doing to the people of Ukraine. How can a country, which suffered the wrath of Hitler, turn around and adopt his very same tactics? Slaughtering innocent people, bombing hospitals, orphanages and schools.”

“Your Holiness,” Rabbi Hier continued, “We stand before you today, 80 years after the infamous Wannsee Conference, where 15 Nazi officials, eight of them PHDs from some of the finest universities, made the decision, agreeing with Hitler’s orders, to mass murder all of Europe’s Jews. By May 1945, in addition to six million Jews, millions of non-Jews, including gypsies, Slavs, homosexuals and other enemies of the Reich, were also killed.

“That is why, your Holiness, we’ve come here today to present to the Vatican Archives one of the most significant documents in the history of humankind; a copy of an original letter, typed and signed by Hitler on Sept. 16, 1919, in which he openly maps out the need for the final removal of the Jewish people in Europe.”

“What began as one man’s opinion,” Rabbi Hier noted, “would become state policy of Nazi Germany 22 years later, which led to the systematic murder of one-third of world Jewry. This document shows the power of words and is a warning for everyone to take threats of any demagogue seriously.

“As the Psalmist teaches, “the Heavens belong to G-d, but the land was given to man.” [Psalms 15-16] It is ‘we the people,’ men and women, who must lead the fight against anti-Semitism, bigotry and genocide.

“Your Holiness, our world needs your leadership now more than ever. As Simon Wiesenthal reminded all of us, “Freedom is not a gift from Heaven, it is something we have to fight for each and every day.”

The Pope denounced the current wave of anti-Semitism and cautioned that the threat of populism continues to be a threat. The Pontiff noted that the letter written and signed by Hitler in 1919 revealed that Hitler did not care about the German people, only promoting a dangerous ideology.

Pope Francis urged the SWC to continue to serve as a bridge between the past and the future. Continue “recalling history so it can be of service to the future.”

The Simon Wiesenthal Center is one of the largest international Jewish human rights organizations with over 400,000 member families in the United States. It is an NGO at international agencies, including the United Nations, UNESCO, the OSCE, the OAS, the Council of Europe and the Latin American Parliament (Parlatino).