Sri Sri Ravi Shankar, a global leader in Interfaith dialogue and human rights activists on four continents was honored by the Simon Wiesenthal Center with its International Leadership Award at a ceremony at the Museum of Tolerance in Los Angeles. 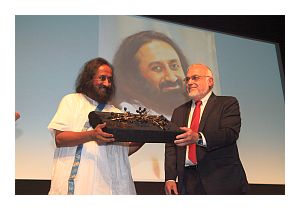 “ Sri Sri Ravi Shankar is well known for worldwide activism and relief efforts on behalf of endangered and displaced minorities across the Middle East and Asia-- including Christians and Yazidis in Iraq,” said Rabbi Abraham Cooper, the Wiesenthal Center’s Associate Dean and Director of Global Social Action (pictured right). “We honor him for courageous deeds on behalf of forgotten victims of violence and terrorism,” he continued.

Cooper added, “As a leading Jewish human rights NGO we also thank the Hindu leader for his longtime friendship and empathy for the Jewish people. He helped the Wiesenthal Center to bring its Courage to Remember Holocaust exhibition to the people of India, spoke at a history-making anti-terrorist conference in Bali-co-sponsored by the Wiesenthal Center and LibForAll Foundation following the horrific terrorist attacks in Indonesia.” Cooper noted that the event included Jewish leaders from Israel and a Holocaust survivor Sol Teichman (pictured below with Sri Sri Ravi Shankar) the first-ever public presentation by a survivor in a nation home to the largest Muslim population in the world. 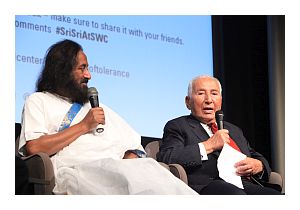 “The Simon Wiesenthal Center was also honored to host Sri Sri when he visited the State of Israel, which included a visit to the Western Wall and meetings with then Chief Rabbi Lau and the late Shimon Peres,” Cooper continued. “We look forward to working with Sri Sri on behalf of mutual respect, human rights and tolerance for many years to come,” he concluded.

The Award, was a menorah by India-based artist Michael Aram that is designed as an olive brach- a universal symbol of peace

For more information, please contact the Center's Communications Department, 310-553-9036. join the Center on Facebook, www.facebook.com/simonwiesenthalcenter, or follow @simonwiesenthal for news updates sent direct to your Twitter feed.The Simon Wiesenthal Center is one of the largest international Jewish human rights organizations with over 400,000 member families in the United States. It is an NGO at international agencies including the United Nations, UNESCO, the OSCE, the OAS, the Council of Europe and the Latin American Parliament (Parlatino).