A key source for the hate, distrust, and disinformation plaguing the world is social media. The SWC’s groundbreaking and respected Digital Terrorism and Hate Project is documenting how social media outlets are being used by extremists to promote lurid conspiracy theories about the horrific attacks on 9/11/2001.

Our new report, September 11 Conspiracies: 20 Years Later, was researched and authored by the Simon Wiesenthal Center researchers from the Center’s Digital Terrorism & Hate Project. It 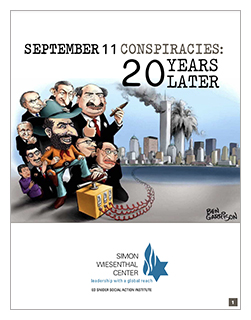 graphically catalogues the misinformation and debunked 9/11 conspiracy theories that advanced the bigoted and prejudiced beliefs and ideologies, especially anti-Semitism.

As this report attests, the internet was used to spread many of the key conspiracy theories immediately after 9/11 and has continued to serve as a platform for these theories to fester and flourish.

These so-called theories are also marketed through a multitude of formats including videos, articles, podcasts, websites, books and t-shirts.

This report also outlines how major and alternative social media platforms, including TikTok, Telegram, Facebook, BitChute, and Odysee continue to be exploited by extremists for the past 20 years to promote and mainstream the misinformation.

Just as anti-Semitism and Jew-hatred have been around for thousands of years, this report highlights the staying power of pernicious and lurid conspiracy theories spawned by fertile imaginations and nurtured by people’s fears.

The report can be accessed at: wiesenthal.com/september11