In a statement released in Jerusalem following a 45-minute meeting with US Secretary of State Mike Pompeo, Rabbis Marvin Hier and Abraham Cooper, founder and dean and associate dean and global social action head said, “We shared with Secretary Pompeo the fears of millions of Americans over the plight of the Kurdish minority in Syria. Secretary Pompeo responded in detail about US efforts to pressure Turkish President Erdogan to stop his military incursion and to ensure that Kurdish civilians in the region will not be harmed.

“The United States has not abandoned the Middle East, we have over 60,000 military in the region,” the Secretary added. 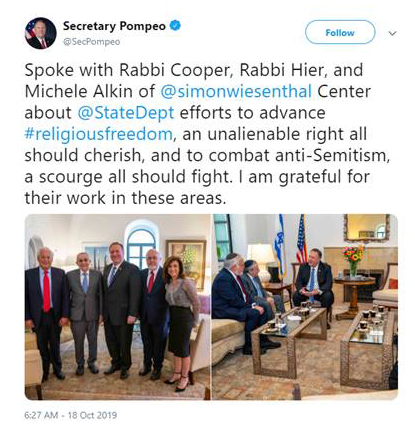 Center officials thanked Secretary Pompeo for his leadership in ratcheting up pressure on the Iranian regime through economic sanctions and other measures designed to help threatened allies in the Gulf region.

Rabbis Hier and Cooper praised the activities of US Special Envoy Against Anti-Semitism, Elan Carr, and expressed a belief that, “We will need continued robust leadership from the US State Department in our struggle against anti-Semitism overseas, especially in Europe.”

The Rabbis from the Wiesenthal Center commended Secretary of State Pompeo for speaking openly about the core values of his faith that help inspire and motivate him to “help make the protection of religious minorities worldwide as a key component of US foreign policy.” The SWC has participated in the Ministerial to Advance Religious Freedom, a project conceived and convened by the Secretary of State in 2018.

The Secretary of State expressed satisfaction over the historic cooperation between the State Department and the Simon Wiesenthal Center. This has included the translations of several films from the SWC’s two-time Academy Award®-winning Moriah Films division which have been translated into 12 languages and which have been viewed to date by over one billion people in Asia, Africa, and Europe. In addition, the State Department co-sponsored the SWC’s historic exhibition, People, Book, Land: The 3,500 year Relationship with the Jewish People and the Holy Land, which has been shown in 30 countries and translated into 14 languages. “We look forward to expanding our relationship with the global programming of the SWC and its Museum of Tolerance,” Secretary Pompeo added.

The meeting took place at the US Consulate in West Jerusalem, just a few yards away from the Museum of Tolerance Jerusalem, a new Simon Wiesenthal Center Museum scheduled to open in 2021. Also attending the meeting was US Ambassador to Israel David Friedman.