The Simon Wiesenthal Center's (SWC) latest special 11-page report details the origins of QAnon; what about this conspiracy is new and how much support QAnon really has. The report also covers incidents sparked by QAnon, politicians who support it, and its future. 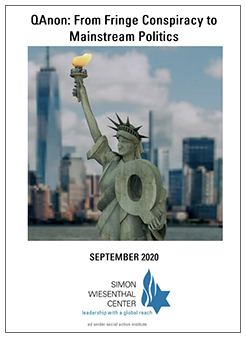 Just as anti-Semitism and Jew-hatred have been around for thousands of years, Qanon: From Fringe Conspiracy To Mainstream Politics highlights the staying power of pernicious and lurid conspiracy theories spawned by fertile imaginations and nurtured by people’s fears.

As this report attests, there is very little original about QAnon’s conspiratorial core. QAnon perpetuates the canard that has been retold for hundreds of years of the Rothschilds controlling banks along with the baseless blood libel against the Jewish people. Other conspiracies include psychological warfare being used on the general population, Big Pharma, and 9/11 responsibility.

In the lead-up to the 2020 elections, the SWC urges all elected officials to review this report. Whatever the political affiliation, the  focus should be on the real challenges besetting our nation and to denounce, not support, fear-mongers and conspiracy peddlers.