As we conclude the week of Holocaust Remembrance, Yom Hashaoh, the Simon Wiesenthal Center is releasing Part Two of its report, Holocaust Denial in Social 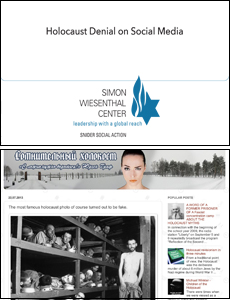 Media.Written and prepared by the Simon Wiesenthal Center’s Research Department through the Center’s Digital Terrorism & Hate Project, this report highlights the rise of Holocaust distortion and denial online. It illustrates how content, including memes and jokes about the Holocaust, are commonplace in numerous platforms, many popular with young people, which then leads to the proliferation of hate and anti-Semitism online.The Simon Wiesenthal Center continues to meet regularly with social media giants to urge them to be vigilant in removing Holocaust Denial, anti-Semitic and related material from their platforms.