Young Mexicans joined the Simon Wiesenthal Center campaign against the message of hate that has soiled the once beautiful image of Pink Floyd. They congregated at the entrance to the performance in the Aztec capital, distributing t-shirts with the message "Resist the racism of Waters - Say no to 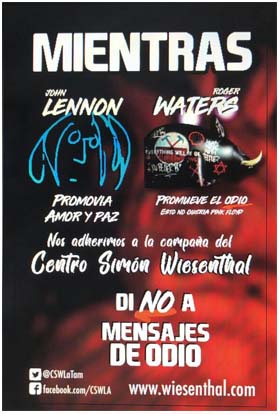 expressions of hate", along with flyers proclaiming, “While John Lennon promoted peace and love, Roger Waters promotes hate. That`s not what Pink Floyd wanted- We join the Simon Wiesenthal Center campaign. 'Say NO to messages of hate'."

According to Karen Stern, who led the initiative: "People were wildly receptive to our message. Everyone put on the shirt and took the flyers with respect. We could not sit idly by in the presence of those who use music to spread violence and discrimination. The Representative of the Wiesenthal Center for Latin America, Dr. Ariel Gelblung's visit to Mexico was crucial and gave us a framework to launch such a global campaign.”

"Roger Waters - the perpetrator of this antisemitism was unmasked in Mexico, and outrageously 'honoured' in Montevideo and Buenos Aires, his Latin American tour has turned sour, exposed by young Mexicans in the name of anti-racism. The Wiesenthal Centre will follow every Waters hatemongering concert, advise sponsors and turn the public away from music in the name of hate," warned Dr. Shimon Samuels, Director for International Relations of the Center.

Dr. Gelblung continued, "Mexican youth has acted in such a way that they have isolated Waters behind his own wall of bigotry and intolerance. People have clearly conveyed to him that they wish he were not there."

“The SWC will continue its campaign to get major sponsors, including AT&T, to stop underwriting this anti-Semite who abuses his position as an entertainer to validate hatred of Jews,” added Rabbi Abraham Cooper, Simon Wiesenthal Center associate dean and global social action head.

For further information, please contact the Simon Wiesenthal Center’s Communications Department, 310-553-9036,  join the Center on Facebook, www.facebook.com/simonwiesenthalcenter, or follow @simonwiesenthal for news updates sent direct to your Twitter feed.
The Simon Wiesenthal Center is one of the largest international Jewish human rights organizations with over 400,000 member families in the United States. It is an NGO at international agencies including the United Nations, UNESCO, the OSCE, the OAS, the Council of Europe and the Latin American Parliament (Parlatino).