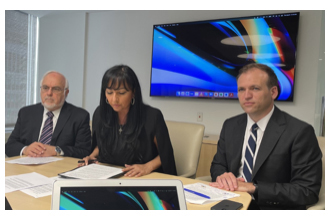 The emotion-laden meeting in New York, which connected an international audience, painted a dire picture of the consequences of an American pullout from Iraq.

“We beseech you on behalf of two historic and endangered peoples, Assyrian Christians and Yazidis, to continue the presence of American troops in Iraq,” reads an open letter to President Biden from the Iraqi Christian Relief Council and Yazda Organization. “Mr. President, we urge you to resist pressure to withdraw all troops from Iraq. Recent blood-soaked history has shown that without such a presence, the history of Assyrians and Yazidis on their ancient lands would end.”

Miss Taimoorazy announced that she would seek an early meeting with US Secretary of State Blinken to secure American assurances that the Biden Administration will not abandon them at this pivotal time in history.