US Special Representative For Iran, Brian Hook, Visits Museum of Tolerance to Discuss US Policy In The Region

Mr. Hook began with a short tour of the Museum. He was joined by Rabbi Marvin Hier, Founder and Dean of the Wiesenthal Center, Rabbi Abraham Cooper, the Center’s Associate Dean and Director of Global Social Action, Reverend Johnnie Moore, founder of the Congress of Christian Leaders, as well as Juliana Taimoorazy, Iraqi Christian Relief Council Founder and President. During the tour, Mr. Hook viewed the Museum’s “Hitler Letter,” (pictured below right) an original letter written and signed by Adolph Hitler in 1919 in which he calls for the destruction of the Jewish people. 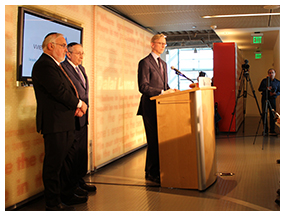 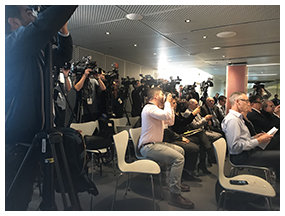 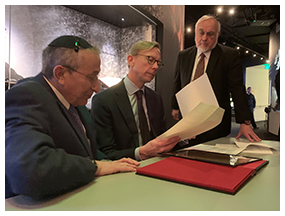 The tour was followed by Mr. Hook briefing Simon Wiesenthal Center leadership as well as national interfaith and local Iranian leaders in a closed door meeting on policy related to Iran.

Following the briefing, Mr. Hook participated in a short press conference attended by both national and international media outlets. Before fielding questions regarding the latest on the US-Iran tension, Mr Hook began by saying, “I wanted to express we, the administration, stand in solidarity opposing all acts of anti-Semitism and vandalization and all violence against Jews. I am here visiting the Wiesenthal Center [Museum of Tolerance]. It’s an organization I have worked with in the past and I very strongly support their work. It was an honor for me to visit the Museum and to see many of the exhibits they have here and to see the great job they are doing and seeing so many school groups move through this Museum so that they will be educated on the horrors of the Holocaust, which the Iranian regime continues to deny and undermine the importance of tolerance as a fundamental goal.”

Following Mr. Hook, Rabbi Hier addressed the media adding, ”The entire leadership of Iran denies the existence of the Holocaust and we have to worry about how we treat them. If they are going to kill American soldiers, we have an obligation to do what President Obama did to Osama bin Laden, what the President of Czechoslovakia did to Reinhard Heydrich, that should be done to the Iranian leaders.”