Our 2020 "Worst Offender Award” is shared by Lebanon and Syria for their obsessive-compulsive antisemitic conspiracy theory titles in their catalogues...Runner-up goes to Iran for its recidivist incitement


PARIS - The Simon Wiesenthal Centre is, for the 18th year, the only non-governmental organization to monitor incitement to hate and violence by publishers at the Frankfurter Buchmesse (FBM) - the “Olympics of Book Fairs.”

This year, the regular 7500 exhibitors from 105 countries and 300,000 visitors, will be absent due to the Pandemic. Nevertheless, through Zoom and virtual hi-tech, publishers will present their titles, unfortunately including voices of hate.

“We normally monitor over 300 stands at the Book Fair for antisemitic and other hatemongering volumes, denouncing the delinquent publishers to the FBM authorities for contravention of their contractual obligations to the Fair... Indeed, several recidivists are in violation of German law,” stated Dr. Shimon Samuels, the Centre’s Director for International Relations.

“Our findings at seven Arab Book Fairs in the months leading up to Frankfurt are shared with the Fair to decide on warning or even blacklisting... Such literature on display at these Fairs can radicalize and even incite to terrorism (see the book “Buraq Wall” published originally in Arabic in Lebanon claiming the Western Wall of the Temple or the Kotel, Judaism's holiest shrine),” continued Samuels. 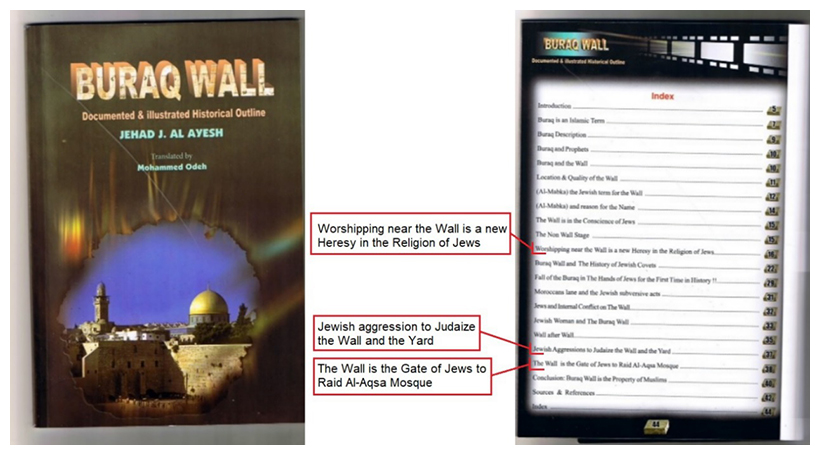 
Last year, the Centre exposed a large number of antisemitic publications at the Fairs of Abu Dhabi and Sharjah.

In view of the recent official peace and normalization of relations signed with Israel, we have shared these titles with UAE Minister of Foreign Affairs, Sheikh Abdullah bin Zayed bin Sultan Al Nahyan, as incompatible with the Abraham Accords and an abuse of the UAE itself. Sharjah International Book Fair 2020 is due to be held 4-14 November. We urged the organizers to ban all publishers displaying antisemitic and anti-Israeli titles,  We have similarly made aware of this danger to Dr. Abdullatif bin Rashid Al Zayani, Foreign Minister of Bahrain, although its March 2020 Book Fair was postponed until the end of the pandemic.

Working off recidivist publishers’ catalogues prepared for the current FBM, our findings are only a tip of the iceberg:

Lebanon (often used as a cover for Syria)

2) “The Secret World Government” (or "The Hidden Hand") - by Arthur Cherep-Spiridovich (translated into Arabic)
More information about the author: https://en.wikipedia.org/wiki/Arthur_Cherep-Spiridovich

3) “Blood for the Matzos of Zion” - by Naguib Al-Kilani

4) “From Judaism to Zionism” - by Dr. As'ad El-Sahramany
Synopsis from their website: "The importance of the book, and at this particular time, is that it exposes the faith of the Jews, reveals the falsity of their historical claims, and explains their satanic methods of employing religion... a clear idea of the conventions of Jews, their groups, their beliefs, their view of women, their holidays, their morals, their religious books, in the service of their Zionist political projects."

5) “Israel from Where and to Where?” - by Mohammed Barham Al-Mashaly
Excerpt of the publisher's description of the book: "No one who lives anywhere in the world denies the crimes committed by the Jews, whether they are political, economic or war crimes. Since the dawn of history... they killed and lit the fires of wars... and they violated all the sanctities of others on the pretext that they are the children of God and his chosen ones, which is a false and unfounded claim."

From the publisher's website: "Jews spread throughout the Ottoman State, participated in its practical life, played important roles in trade and handicrafts, and were allowed to apply their religious laws... However, Jews had a very negative impact on the state’s economy. The inflation that began in the 16th century was due to their nipping off bits of coins’ edges, which led to a decrease in soldiers’ purchasing power, causing... mutinies and harming the system of the state and society."

8) “Judaization of Knowledge” - by Mamdouh Adwan

Dar Ghar Hira
â¨9) ”The Day of Wrath” - by Safar bin Abdul-Rahman al-Hawali
Presented as: "A treatise on the Second Intifada, entitled The Day of Wrath, arguing that the Biblical prophecies used by Christian fundamentalists to support the State of Israel actually predict its destruction."

10) “Is Judaism a Heavenly Religion?” - by Abd Elmajjid Hemo

11) “The International Jew” - by Henry Ford
Publisher's description (translated from Farsi): "Henry Ford, a well-known American financier, industrialist and founder of the Ford Motor Company in the years after World War I, commissioned a group of leading scholars to study various aspects of "international Jewry." He published the group's research findings in the 1920s. Ford's research showed how the Jews intend to influence world developments based on the plans and programs outlined in the "Protocols of the Elders of Zion." This book describes... how the Jews influenced American politics, the arts of cinema, theater and music. The economic power of the Jews in the United States is another part of this book."

12) “Why did Hitler kill the Jews?” - by Babak Mostafavi
From the publisher's website: "Why Hitler Killed Jews is a book that examines in a completely historical and expert way the reason for Hitler's enmity and hatred of Jews. This book gives practical and historical answers to many of your questions..."

Samuels announced that the Centre’s “2020 Worst Offender Award” is shared by Lebanon and Syria for their obsessive-compulsive antisemitic conspiracy theory titles in their catalogues.
Runner-up goes to Iran for its recidivist incitement.
"The Frankfurt Book Fair must not be abused as a vector for bigotry. We look forward in the hope that the Fair will one day be completely hate-free,” concluded Samuels.