Eighty years after âThe Final Solutionâ was launched, our one demand of the world - Read "Jewish Journal op-ed by Rabbi Abraham Cooper

Eighty years after ‘The Final Solution’ was launched, our one demand of the world

On Jan. 27, the 77th anniversary of the liberation of Auschwitz-Birkenau, the United Nations and many governments around the world will commemorate International Holocaust Memorial Day. 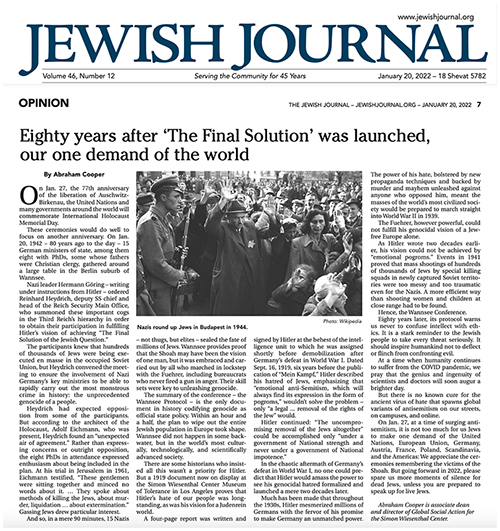 These ceremonies would do well to focus on another anniversary. On Jan. 20, 1942 – 80 years ago to the day – 15 German ministers of state, among them eight with PhDs, some whose fathers were Christian clergy, gathered around a large table in the Berlin suburb of Wannsee.

Nazi leader Hermann Göring – writing under instructions from Hitler – ordered Reinhard Heydrich, deputy SS chief and head of the Reich Security Main Office, who summoned these important cogs in the Third Reich’s hierarchy in order to obtain their participation in fulfilling Hitler’s vision of achieving “The Final Solution of the Jewish Question.”

The participants knew that hundreds of thousands of Jews were being executed en masse in the occupied Soviet Union, but Heydrich convened the meeting to ensure the involvement of Nazi Germany’s key ministries to be able to rapidly carry out the most monstrous crime in history: the unprecedented genocide of a people.

Heydrich had expected opposition from some of the participants. But according to the architect of the Holocaust, Adolf Eichmann, who was present, Heydrich found an “unexpected air of agreement.” Rather than expressing concerns or outright opposition, the eight PhDs in attendance expressed enthusiasm about being included in the plan. At his trial in Jerusalem in 1961, Eichmann testified, “These gentlemen were sitting together and minced no words about it. … They spoke about methods of killing the Jews, about murder, liquidation … about extermination.” Gassing Jews drew particular interest.

And so, in a mere 90 minutes, 15 Nazis – not thugs, but elites – sealed the fate of millions of Jews. Wannsee provides proof that the Shoah may have been the vision of one man, but it was embraced and carried out by all who marched in lockstep with the Fuehrer, including bureaucrats who never fired a gun in anger. Their skill sets were key to unleashing genocide.

The summary of the conference – the Wannsee Protocol – is the only document in history codifying genocide as official state policy. Within an hour and a half, the plan to wipe out the entire Jewish population in Europe took shape. Wannsee did not happen in some backwater, but in the world’s most culturally, technologically, and scientifically advanced society.

There are some historians who insisted all this wasn’t a priority for Hitler. But a 1919 document now on display at the Simon Wiesenthal Center Museum of Tolerance in Los Angeles proves that Hitler’s hate of our people was longstanding, as was his vision for a Judenrein world.

A four-page report was written and signed by Hitler at the behest of the intelligence unit to which he was assigned shortly before demobilization after Germany’s defeat in World War I. Dated Sept. 16, 1919, six years before the publication of “Mein Kampf,” Hitler described his hatred of Jews, emphasizing that “emotional anti-Semitism, which will always find its expression in the form of pogroms,” wouldn’t solve the problem – only “a legal ... removal of the rights of the Jew” would.

In the chaotic aftermath of Germany’s defeat in World War I, no one could predict that Hitler would amass the power to see his genocidal hatred formalized and launched a mere two decades later.

Much has been made that throughout the 1930s, Hitler mesmerized millions of Germans with the fervor of his promise to make Germany an unmatched power.

The power of his hate, bolstered by new propaganda techniques and backed by murder and mayhem unleashed against anyone who opposed him, meant the masses of the world’s most civilized society would be prepared to march straight into World War II in 1939.

The Fuehrer, however powerful, could not fulfill his genocidal vision of a Jew-free Europe alone.

As Hitler wrote two decades earlier, his vision could not be achieved by “emotional pogroms.” Events in 1941 proved that mass shootings of hundreds of thousands of Jews by special killing squads in newly captured Soviet territories were too messy and too traumatic even for the Nazis. A more efficient way than shooting women and children at close range had to be found.

Eighty years later, its protocol warns us never to confuse intellect with ethics. It is a stark reminder to the Jewish people to take every threat seriously. It should inspire humankind not to deflect or flinch from confronting evil.

At a time when humanity continues to suffer from the COVID pandemic, we pray that the genius and ingenuity of scientists and doctors will soon augur a brighter day.

But there is no known cure for the ancient virus of hate that spawns global variants of antisemitism on our streets, on campuses, and online.

On Jan. 27, at a time of surging antisemitism, it is not too much for us Jews to make one demand of the United Nations, European Union, Germany, Austria, France, Poland, Scandinavia, and the Americas: We appreciate the ceremonies remembering the victims of the Shoah. But going forward in 2022, please spare us more moments of silence for dead Jews, unless you are prepared to speak up for live Jews.

Abraham Cooper is associate dean and director of Global Social Action for the Simon Wiesenthal Center.