Wiesenthal Centre to Spanish Minister of Universities: âUniversity of Santiago de Compostela âAuschwitz/Gazaâ Seminar is an Exercise in Hateâ

In a letter to Spanish Minister of Universities, Manuel Castells Oliván, the Centre’s Director for International Relations, Dr. Shimon Samuels, stated, "It has come to the Centre’s attention, that the University of Santiago de Compostela will be hosting a 'seminar', entitled ‘Auschwitz/Gaza: a testing ground for comparative 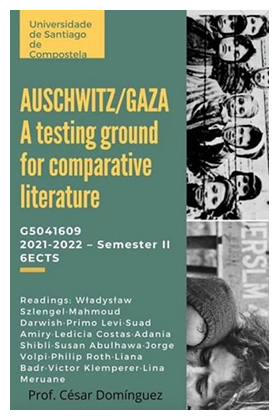 He continued, “This very title and expected content is not an issue of ‘freedom of expression’, but a banalization of the Holocaust, which can incite to hatred and violence against Jews of today.”

The letter also viewed it as “an insult to Spanish republicans deported to the Nazi death camps. Our mentor, the late Simon Wiesenthal, met many in Mauthausen.”

The Centre urged the Minister to “intervene with the University concerned to cancel this outrage by its Faculty of Philology.”

Samuels noted that, “In February, hundreds from across Spain demonstrated in Santiago de Compostela against the so-called ‘Auschwitz Law’. This was apparently a protest against anti-Coronavirus vaccinations and the wearing of face-masks.”

“The trivialization of the Holocaust on that occasion showed public ignorance. On a University campus, however. it is clearly a political exercise in hate,” concluded Samuels.