New York, NY, March 14, 2019 – The Simon Wiesenthal Center (SWC) released its annual Digital Hate and Terrorism Report today at a City Hall press conference. City Councilman Mathieu Eugene stood with Rabbi Abraham Cooper, Associate Dean and Director of Global Social Action of the Wiesenthal Center, as the rabbi discussed the impact of digital terror and online hate, which hit especially close to home this year with the massacre of 11 Jews, at prayer in a Pittsburgh synagogue, by Robert Bowers -- an active participant in the white nationalists’ online movement. 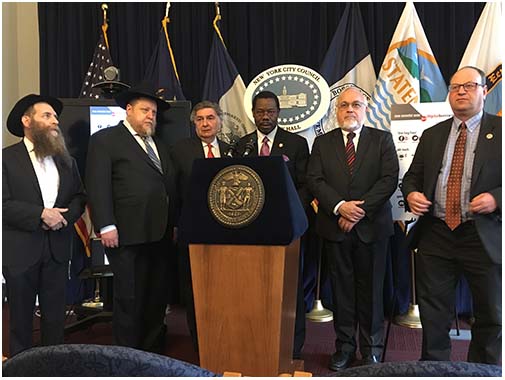 "There is no place in our society for the hateful rhetoric that continues to spread through social media and online forums,” said Councilman 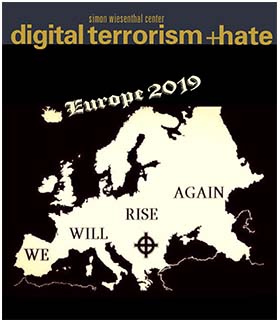 Eugene. “We must all come together to combat this type of behavior that is harmful to our society and has negative consequences when it is allowed to permeate our communities."

Today’s release marks the 25h year that the Wiesenthal Center has issued an interactive report focusing on what has become a critical global frontier in the marketing of hate and terrorism. The Wiesenthal Center has tracked, over the past year, the continued emergence of Alt.Tech – a new generation of social media platforms that serves the Alt-Right – as well as the emergence on popular gaming platforms of bigotry, anti-Semitism and the glorification of radical Islamic terror.

Also noteworthy is the declining performance of Facebook in handling hate-speech on its platform. Over the past two years, the popular platform’s Digital Terrorism and Hate Report Card grade has fallen from A-minus to 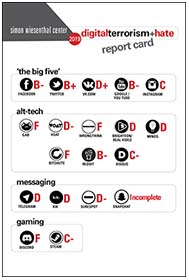 B-minus. Each year, the Digital Terrorism and Hate Report Card has evaluated the efforts of well-known and lesser-known online platforms in monitoring and removing hate-speech. Working with the Wiesenthal Center, Facebook and Twitter have become increasingly aggressive in identifying dangerous content, removing it from their platforms, and banning certain offenders. Together, Facebook and Twitter have removed hundreds of thousands of postings. But in recent years they have become more permissive of dangerous ads and less proactive in addressing hateful content.

“The Simon Wiesenthal Center social media report card proves that social media giants can and must do more to degrade the capabilities of racists, anti-Semites and terrorists,” said Rabbi Cooper, adding, “The idea of online hate and terror posing a danger is not an abstraction. We’ve seen the impact foreign terrorist groups who use the Internet to spread their messages of hate and to organize. Now we’ve seen the model replicated in the U.S. to tragic effect.“

Rabbi Cooper added: “New platforms are coming online with extreme frequency and they are quickly colonized by Alt-Tech. They encompass everything from interactive personal profiles and micro-blogging to chat and even video games, like Fortight, and gaming platforms, like Steam, where bigots demean the memory of the Holocaust and celebrate Nazi symbols like the swastika.”â

• Digital Terrorism and Hate Report 2019 can be accessed here >>> http://www.digitalhate.net/index.php